A&A, our Vectorworks distributor in Japan, knows how to throw a party! 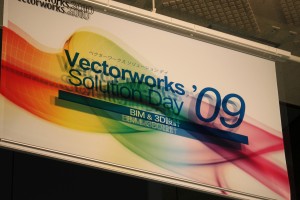 The attendees were also inspired by well-known Japanese designers including Tomohiko Yamanashi from Nikken Sekkei, Katsuyuki Noda from Noda Tec, and Daisuke Hamasaki from Nomura Co. Ltd, who presented case studies on BIM projects, award-winning 3D designs, and the integration of Vectorworks and Parasolid.

We congratulate our Japanese partners on their successful events and look forward to their official launch of Vectorworks 2010 next year!

Read here for the story in Japanese and feel free to peruse the event photos.