Congratulations to Robert Androse Glover, winner of  a Wacom Intuos5 pen tablet in the third phase of our Vectorworks: From Sketch to BIM project, which demonstrates how to transform a hand-drawn sketch into a Building Information Model (BIM). Members of the public can vote on key details for each phase, and their votes automatically enter them to win one of two tablets given away after each phase is completed. 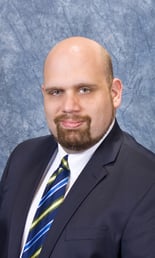 Robert Androse Glover is a project designer and BIM coordinator in the architectural department at Wiley|Wilson, where he's worked on projects such as the Central Campus area of Fort Lee, Virginia, a five-building, state-of-the-art campus to help train the next generation of soldier and quartermasters, and the major expansion of the Richmond City Justice Center, a project in which Wiley|Wilson served as the mechanical and plumbing designer for the mechanical and plumbing sub-contractor, and, under a separate contract, served as the electrical designer for the electrical subcontractor.

As BIM coordinator, Androse Glover identifies and resolves construction conflicts. "It really requires an open mind, willingness to learn the constraints and abilities of other building systems, and, most importantly, a holistic view of the design from all sides," he said. "This contrasts to my role as an architectural project designer in that although I attempt to provide adequate space for the building systems, my focus is on the functionality of the user spaces and the appearance of the building, and I leave the creation/modification of the building systems to the engineers."

Androse Glover's design philosophy is more technical than artistic. "I strive to ensure that all the building systems and client requirements are met in a way that is both functional and aesthetically pleasing," he said. He begins a project by looking at images of the surrounding buildings and of projects done for the same client in the past. "When possible, I strive to try new systems and ways of building that allow for faster, easier, cheaper construction while still providing the client what they want and deserve," he said.

He begins using software early in the process, and much of his work is for governmental clients that already have an established design. "However, when I do get to work on a design from scratch, I find it useful to familiarize myself with as many aspects of the client's requirements as possible and have a design kickoff meeting with the entire design team and general contractor, if possible," he said. "At this meeting we will discuss items such as types of systems needed in the building, above ceiling requirements for those systems, and most importantly, how we can go above and beyond the client requirements without blowing the bank. Not only does this meeting give me important insight into ensuring that the building will be designed to accommodate building systems later on, but it also is a great opportunity to discuss alternative design options such as shading, daylight, etc."

Glover also has a passion for architectural photography, which began in high school when a friend gave him an old Ricoh XR-10 35mm SLR (single-lens reflect) camera. And, with a stepfather who was an architect and his own career in architecture, buildings were a natural focus for him.

"Photography is a sort of meditative contemplation for me," he said. "Balancing the aesthetic image in the viewfinder with the technical requirements of getting that image onto film or digital sensor in just the right way to maximize the feeling of being in the space. Although this tends to slow down my entire workflow from taking the picture through printing, I feel it gives the image better depth and if nothing else, a more personal connection."