Arlington National Cemetery (ANC) wasn't the only notable site being tended to during this year’s Renewal & Remembrance event. Located next to the Armed Forces Retirement Home, in Washington, D.C., lies the United States Soldiers’ and Airmen’s Home National Cemetery, one of the oldest national cemeteries in the country. These ancient grounds are well-known for being a resting place for many Civil War veterans, as well as 14,000 other late soldiers. As a result, maintaining these grounds is an important undertaking, which is why the National Association of Landscape Professionals (NALP) was asked to include this cemetery in its annual Renewal & Remembrance event. 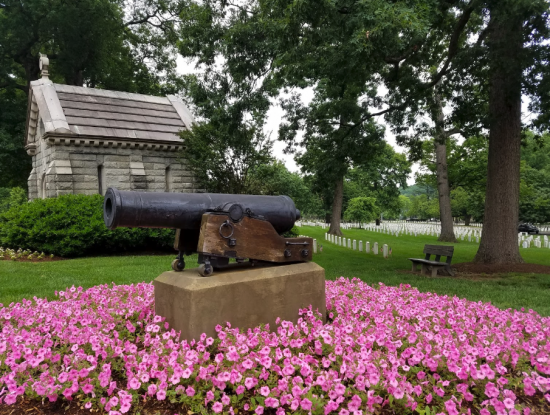 Renewal & Remembrance is held annually to honor America’s veterans and provides an opportunity for landscape industry leaders to assist in keeping some of our nation’s most sacred grounds beautiful. Commemorating its 21st year on July 17, this year’s event drew more than 400 landscape professionals. Volunteers came from all over the country, taking time off during their busiest season of the year to pay respects to our nation’s heroes by sharing their expertise and working up a sweat to ensure the continued health of the cemeteries.

Most volunteers are practitioners from the lawn care, landscape design, landscape installation, site maintenance, irrigation, or arboriculture industry. “Through their willingness to donate their time, talents, equipment and materials, our members make this tremendous event possible year after year,” says Missy Henriksen, vice president of public affairs, NALP. “Renewal & Remembrance truly holds special meaning to all who are involved. As an association, we are humbled and honored to come together at Arlington National Cemetery to pay our respects to those who have made the ultimate sacrifice for our freedom.”

A landscape volunteer in action at Renewal & Remembrance.

All the generous volunteers were scheduled to be at the Arlington National Cemetery by 7:30 a.m. The event kicked off with an opening ceremony featuring several speakers, including: Katharine Kelley, ANC Superintendent; Jon Cundiff, NALP President; Ed Klass of Southern Sprinkler Systems; John Eggleston, Event Chair. The ceremony also included an invocation and presentation of the colors by the Navy color guard.

While each speaker focused on different topics, they all centered around one common theme: the importance of service and remembrances of the men and women buried at these cemeteries. One thing the NALP has made apparent over these last two decades of Renewal & Remembrance events is that they are grateful for all who serve our nation. 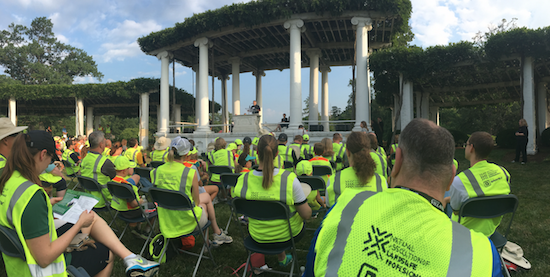 After the ceremony, most of the volunteers headed to work in areas of the Arlington National Cemetery, while the rest boarded a bus and headed to the new project site in Washington, D.C. The 40 volunteers at the Airmen’s Home National Cemetery were in charge of liming, aerating, landscaping, and conducting a hardscape project near the Tomb of the Unknown Soldier. “This is a project I was asked to design and specify material for, so it was very exciting to see it come to life,” says Eric Gilbey, Vectorworks product marketing manager. Tyler French, marketing program coordinator at Vectorworks, also participated in this event and described the lime spreading as a “tough and rewarding job.” Despite the heat, the team completed the work quickly, and they expressed interest in adding tree work to their to-do list for next year’s event. 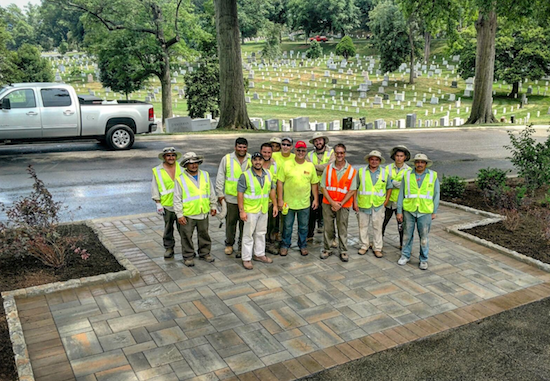 Eric Gilbey has been closely involved with event logistics and has served for the past three years on the Renewal & Remembrance NALP Committee as the transportation and greeting champion. With the support of his fellow committee members, he was responsible for the organization and day-of configuration for getting volunteers where they needed to be and back again. As of this last event, Gilbey now serves as the vice chair and in 2019 will become the chair of the Renewal & Remembrance Committee. In this new role, he will be responsible for coordinating this event with the help of NALP’s staff.

“This was the 8th year for our Vectorworks team in providing beautification services for the hallowed grounds of the Arlington National Cemetery and now the Soldier’s and Airmen’s Home Cemetery,” says Gilbey. “We are extremely honored to give our time and skills each year, and look forward to doing so again in the coming years."

Renewal & Remembrance is a significant event that takes immense effort to plan, coordinate, and transport all the equipment and volunteers. The Renewal & Remembrance committee, consisting of NALP members, does a tremendous job pulling the whole event together every year, thus facilitating a chance for landscape professionals to show their gratitude and respect for our country’s fallen soldiers.