Artist Bill Bell has been creating displays with light for the past two decades. His work can be seen in science museums, private collections, and public spaces such as the new Sound Transit light rail tunnel in Seattle, Wash. His creations have been featured in exhibits across the U.S. and in cities around the world, including Tokyo, Sao Paulo, Munich, Paris and Barcelona.

Currently, Bill's "Light Sticks, White" installation can be viewed at the Rose Fitzgerald Kennedy Greenway Conservancy in Boston, Mass., as part of the "Bright Lights for Winter Nights" outdoor public art exhibit, which runs through March 20.  "Light Sticks, White" consists of 1,300 LED lights and, according to The Greenway's website, "presents an intriguing scene which can be read either as a fixed array of pulsating light or as a solid image traveling across the array, allowing viewers to fill in their own meaning." 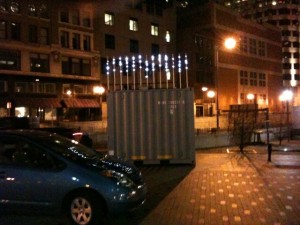 Bill uses Vectorworks during the design process of his work, which he described as "unexpected illusions." He said his art is best viewed first hand, as it is "media proof," and doesn't show very well in photographs or videos. "Nothing does what you get when you see it in person," he said.

So, pack your bags for Boston to experience "Light Sticks, White." We look forward to seeing more from Bill in the future!