Last weekend at the USITT 2010 Annual Conference & Stage Expo, lighting designer Ben Pilat was presented with the 2010 Rising Star Award. This annual award, sponsored by LDI 2010 and Live Design, "recognizes excellence and artistic achievement in the areas of scenic, lighting, sound, and projection design, or the convergence of these design disciplines."

"I'm honored to be the recipient of the Rising Star Award," said Ben. "I'm especially grateful to Live Design and USITT for supporting emerging designers." 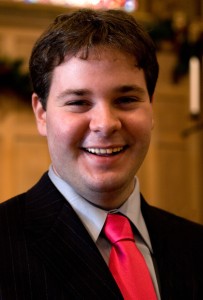 This Vectorworks user may only be in the first act of his career (the Rising Star Award is given to designers in the first four years of professional work after completing their highest level of education), but Ben already boasts an impressive resume. He earned an MFA in Lighting Design from Boston University, and his recent credits include work as assistant lighting designer for productions at The Juilliard School, The Kennedy Center, the New York Theatre Workshop and The Muny in St. Louis. He is currently the lighting supervisor for the Los Angeles Ballet.

Ben said he was introduced to lighting design in high school, and became more seriously involved in the craft while in college. He reached a turning point when he assisted another student on the lighting for a production of The Laramie Project. "It was during that experience that I realized the power that light has to shape a production," he said. "I learned that light is another character with the ability to advance the storytelling in interesting ways."

So, what's next for this bright talent? Ben has a wealth of options. He said he would like to begin assisting on Broadway, as well as continue to pursue his own design career. As a former magician, Ben would love to design magic shows. He also enjoys sharing his knowledge and experience with students and would consider a possible career path in teaching.

Congratulations to Ben, and our best wishes for success in the future!