What an impressive showing by Swiss firm Habegger AG at the 2010 XAVAR awards--a gold and silver medal in the "best supplier" category! 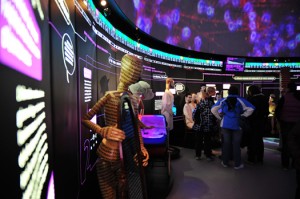 Expo about the human genome at the University of Geneva. Photo courtesy of Habegger AG. 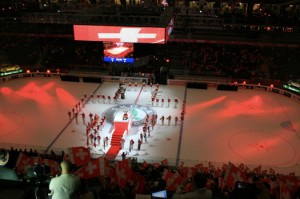 Each year the Live Communication Association of Switzerland recognizes firms who create great quality experiences in the event and exhibition industries.

Habegger AG won the gold for planning and realizing all shows and multimedia performances at the 2009 IIHF (ice hockey) World Championship and a silver for designing an exposition about the human genome at the University of Geneva to celebrate the university's 450th anniversary.

"We used Vectorworks to draw the plans for our 'classical' lighting, audio, and video plots as well as the entire video-schemes for the venues," explained Habegger AG's project manager Francesco Stendardo. "The software is versatile and easy to use, so it was simple to involve other people in the drawing process--even if they had no experience working with CAD."

Congratulations to the designers at Habegger AG for making the impossible possible. We can't wait to see what's next.