Next time you are in an orchestra hall or church take notice of the pipe organ--it may have been designed in Vectorworks!

Joseph Zamberlan of J. Zamberlan & Co. has been in the business of designing, building and maintaining pipe organs since 1999.  "I use Vectorworks for all my drafting, from initial design and proposal concepts through to final construction drawings for the pipe organs," says Joseph. "Its power and precision, combined with the ease of use, help me be creative and productive at the same time." 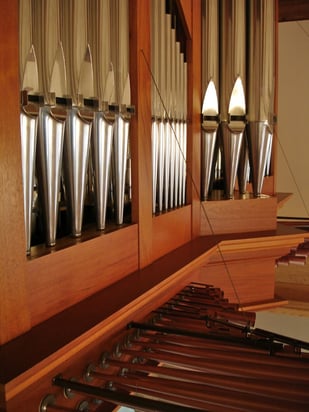 During the middle of the 19th century, before professional orchestras became the norm in cities, large organs were customarily located in civic halls and auditoriums. Beginning in the early 20th century, however, many of these instruments fell into disuse, and several notorious examples from the 1960s and 1970s (e.g. The Kennedy Center in Washington, DC) only helped reinforce the idea that organs belong in churches. Many people point to the C.B. Fisk organ built for the Morton H. Meyerson Symphony Center in Dallas, and inaugurated in 1992, as a watershed event for the cause of pipe organs in orchestra halls; its success is due in part to the fact that it was conceived as an organ for a symphony hall, not a church organ transplanted into one. Since then, many other cities have installed large organs in new halls; two of the most recent and notable are the Rosales/Glatter-Götz organ in the Walt Disney Concert Hall in Los Angeles and the Dobson organ in the Verizon Hall at the Kimmel Center for the Performing Arts in Philadelphia.

We thank Joseph Zamberlan for an insight into the history of pipe organs and for the contribution he makes with his unique designs.