Vectorworks 2011 was honored at this year's Construction Computing Awards as the winner of the Product of the Year 2010 award.

The awards ceremony was held November 28 at The Guoman Tower Hotel in London. About 200 attendees from industry-leading companies attended the event, which included a champagne reception, a three-course dinner, and entertainment by comedian Adam Bloom. Team members from our UK distributor, Computers Unlimited, were in attendance to accept the award.

Now in their fifth year, the Construction Computing Awards (also known as The Hammers) showcase and reward the technology, tools, and solutions for the effective design, construction, maintenance, and modification of commercial buildings, residential and social housing, and civil engineering projects of all sizes. Results are determined by Construction Computing Magazine reader votes and decisions by a panel of judges. This year's awards were presented by Paul Morrell, the UK Government's Chief Construction Advisor. 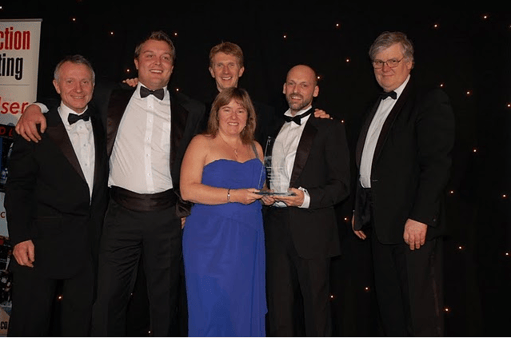 The Computers Unlimited team accepts the Product of the Year award for Vectorworks 2011.