Once in a great while we meet a user who impresses us not only with his accomplishments but also with his long-standing commitment to the program. Tom Harley-Haddow is that type of Vectorworker. 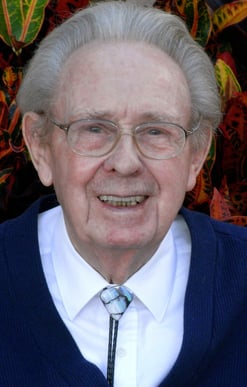 "I turned 89 last month and am looking forward to using Vectorworks into my 90s," says Tom.

Originally from Scotland, Tom started his own engineering firm in 1950 named Harley Haddow Consulting Engineers which has offices in Edinburgh, Glasgow, and Guildford. Since 1980, Tom has lived in Australia but still enjoys designing various projects.

He received the prestigious O.B.E. (Officer of the Order of the British Empire) by the Queen at Buckingham Palace in 1973 for services to the building industry and knowledge of building works.

Although he is not designing his own retirement home, he is planning the interior as he will have to cut down on furniture, clothes etc. "The building is new and phase three with our unit is not yet built. The building is part of a three to four level development in wooded countryside close to the Brisbane central business district (CBD)," explains Tom.

We wish Tom Harley-Haddow the best of luck with his future designs and thank him for his continued support!