On September 4, 2010, a 7.1-magnitude earthquake struck the city of Christchurch in the Canterbury region of New Zealand. Then on February 22 of this year, the city was hit again by a 6.3-magnitute quake. These earthquakes, along with hundreds of aftershocks, have caused extensive damage to buildings in the central city and surrounding suburbs.

"The challenge is to work out the extent of the loss, the extent of land damage that's so permanent you can't rebuild at all, and a process that manages the reinstatement of some 60,000 homes that will need to be repaired," said Nic Jackson, planning and design manager for the Earthquake Recovery (EQR) Command Centre. EQR was established by the Earthquake Commission of New Zealand and is run by The Fletcher Construction Company. "Software packages have amazing potential to contribute to projects in so many ways," said Jackson. "They can be used conventionally in the way perhaps they were intended--technical drawing in 2D or 3D--or with some lateral thinking they can be used slightly outside the norm."

While Jackson does use Vectorworks in a more traditional way to create office layouts, he also uses the software as a communication tool to create graphics (such as in the diagram below) to explain issues that might otherwise be difficult to understand. "Vectorworks is an ideal tool in that regard," he said. "With a little imagination you can generate pictures that capture key issues, show priorities, and define goals all in brilliant color." 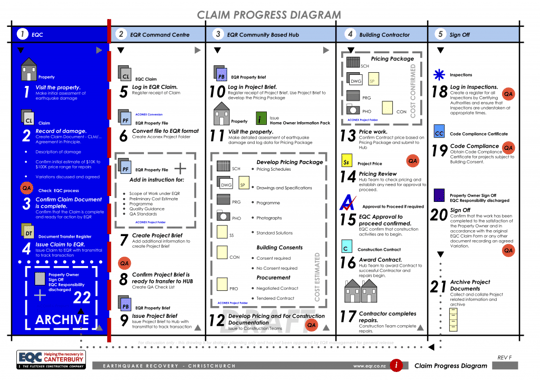 Our thoughts are with the people of Christchurch as they rebuild, and we wish the EQR team great success in their efforts.