The Gold Award for landscape was awarded to Lukas Schweingruber und Rainer Zulauf  from Schweingruber Zulauf Landschaftsarchitekten for their transformation of an old train viaduct area into a path and park  for pedestrians and cyclists. A video about the project can be viewed on art-tv.ch.

Knapkiewicz & Fickert won the Silver Award in architecture for their residential development in Zürich. The jury described the project as "timeless, unique and surprisingly 'unswiss' with its 360 apartments built for two communities connected by a green courtyard." 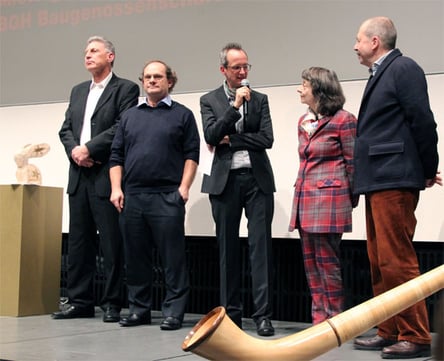 This awards ceremony is organized by one of the most renown and widely-read architectural magazines, the "Hochparterre", as well as the Zürich Museum of Design and art-tv.ch, a cultural Internet TV broadcaster.

We congratulate the winners!