As we reflect back on the 1960s, numerous life-changing events come to mind. The Vietnam War, the assassinations of Dr. Martin Luther King Jr. and Robert Kennedy, and feminist demonstrations all represent a turning point in history--the emergence of a new generation in the U.S.

Thanks to the Minnesota Historical Society (in partnership with the Atlanta History Center, the Chicago History Museum and the Oakland Museum of California) we can view many of these social changes in The 1968 Exhibit, an extraordinary, state-of-the-art, multimedia exhibit that reveals how the experiences of the year fueled a persistent and often contradictory sense of identity.

Vectorworks user William Maple was asked to render views of The 1968 Exhibit so that various members of the team and donors could have a better sense of the overall project. "My task was to simplify the framework design of the exhibition (developed by John Low) and fabrication drawings so that they could be illustrated and walk-through animations could be produced," explains Maple. 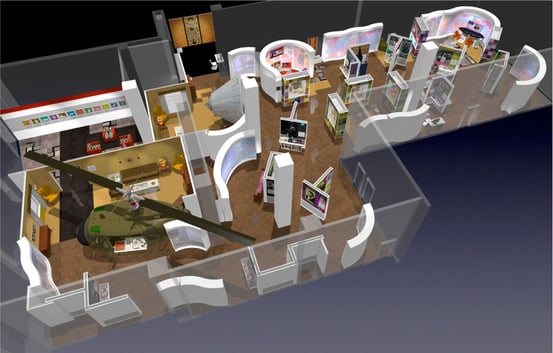 "Plans and elevations give one picture, graphic and artifact layouts give another, but we needed to combine the various planning elements to give a holistic view of the exhibition," says Maple. "Even though all three of us were in different parts of the country, the Vectorworks software allowed us to build on each other's work and produce a presentation package for the Museum's leadership staff as well as a marketing tool to seek other venues for the traveling exhibition." 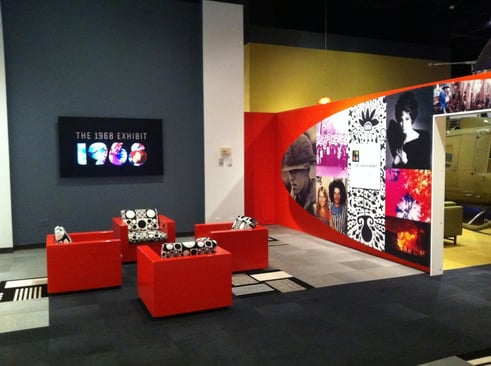 The 1968 Exhibit is currently at the Minnesota History Center and will travel to the Oakland Museum of California next.