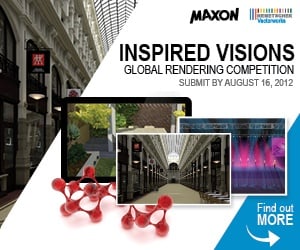 Beginning today, professional and student designers can submit entries to the 2012 Inspired Visions Global Rendering Competition. This annual competition, which is sponsored by Nemetschek Vectorworks, Inc. and MAXON Computer GmbH, recognizes today’s top architects and designers from around the world, and their abilities to visually render Vectorworks models with Renderworks or CINEMA 4D. Submissions will be accepted from April 18 to August 16, 2012, in the following categories:

“We are excited to collaborate again with our sister company, MAXON Computer,” says Theresa Downs, communications director at Nemetschek Vectorworks. “It is evident that more and more designers are using both programs to create renderings, and we expect great things from the entries this year.”

Each category winner chosen by these judges will receive $2,500 USD and will be featured in an official media release and on Planet Vectorworks. Winners will also be promoted on the Nemetschek Vectorworks and MAXON social media channels, such as Facebook, Twitter, and YouTube.

In addition, the public will select their “Fan Favorite” from all entries, which will be posted on the competition’s website. Voting will take place directly on the site.

To enter, vote or learn more please visit the competition website.  We can’t wait to see how you wow us with your entries!

To read the press release in full, please go here.