Division1 Architects has received a 2012 residential architect Design Award (RADA) for its vision behind The Lacey, a high-end, 26-unit condominium building it designed for Washington, D.C.’s thriving U Street corridor. The project received a RADA Merit Award in the Multifamily Housing category and was one of 36 winning designs honored from among nearly 800 entries to this annual design competition. 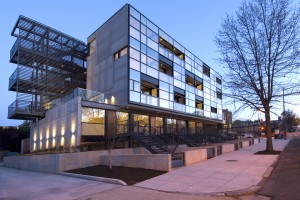 The Lacey sits on the former parking lot of the legendary soul-food restaurant, the Florida Avenue Grill, which survived the 1960s race riots, as well as neighborhood decline and a recent rebirth. To honor this legacy, the owner sought something different from the brick-and-mortar tenant buildings of the past.

“The owner wanted this to be a forward-looking landmark—something that engaged the street,” said Ali Reza Honarkar, who founded Division1 Architects in 1994. “We therefore had to come up with a building that had its own personality and stood on its own—all while showing respect to the neighborhood and its history. The Lacey was meant to make a statement, and I think that is exactly what makes it work.”

Praised by RADA jury members for its transparency and industrial elegance, The Lacey’s concrete walls, solid steel framework and transparent glass panels combine to create an intriguing 24,000-square-foot, four-story structure complete with an interior atrium in which hallways seem to float unsuspended. The inside combines form and function. Units embrace open plan design, providing the freedom and flexibility to facilitate better living through architecture.

During the design and planning phases of the project, Division1 used Vectorworks Architect with Renderworks to create concept studies and presentation boards. Additionally, all contract documents, including plans, elevations, sections, and details, were created with Vectorworks software.

Read more about The Lacey and the other winning projects in residential architect magazine’s May/June 2012 issue or on its website.