Peter Walker, FASLA, has become a legend in his own time. One of the leading landscape architects in the Modernist movement, Walker was chosen to help design and build the National 9/11 Memorial in New York City, and his list of accolades continues to expand.

All in all, he has received over 70 design awards in the regional, national, and international spheres, including the coveted Cooper Hewitt National Design Award, the Sir Geoffrey Jellicoe Award from the International Federation of Landscape Architects, the Honor Award of the American Institute of Architects, Harvard’s Centennial Medal, the University of Virginia’s Thomas Jefferson Medal in Architecture, and the American Society of Landscape Architects Medal. 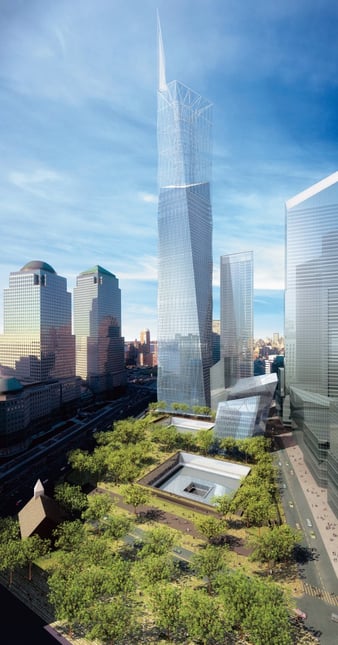 The National 9/11 Memorial opened on September 11, 2011. Several years earlier, Walker had been brought in by the jury overseeing the competition to work with architect Michael Arad to help Arad realize his vision for the Memorial—two large fountain-lined voids marking the footprints of the fallen Twin Towers and carrying the names of those lost in the 9/11 attacks and in the 1993 bombing attack on the World Trade Center. Walker and his firm, PWP Landscape Architecture, balanced the stoic stone memorial with a lush park to encourage reflection and respite for visitors as well as the inhabitants of Lower Manhattan, one of the densest neighborhoods in the country.

Walker prefers to focus on a few objects and use only a few meaningful materials. “I’m interested in how few things you can use that have multiple interactions, for instance where a group of trees will throw shadow. I'm interested in where people might sit—not just benches, but steps, walls, all of that. I’m always interested in trying to make fewer things do more things. It’s more than an interest in reductiveness—it’s more of an artistic interest,” says Walker. This approach is evident throughout the National 9/11 Memorial.

Walker and his firm used Vectorworks Landmark software to create and model the National 9/11 Memorial, as they do with all of their designs. “We always use Vectorworks on preliminaries. That’s typically the way we work—everyone here has to do that. It’s much more flexible, it’s much more refined than AutoCAD,” notes Walker. Walker commends the three-dimensionality. Since it’s so difficult to draw, the ability to quickly maneuver a design in 3D is tremendously helpful. He appreciates the fact that you can blow up a detail to its actual size in order to see it better.

By shaping a strong tradition of Modernist landscape design in the U.S. and throughout the world, Walker has helped to create a vocabulary that continues to drive design. Through his many notable projects, he has fashioned spaces that commemorate some of the most important moments in history—living monuments that will continue to thrive for years to come.

To read the full profile, please visit the Success Stories page of our website.