Working on the NHL Winter Classic, Pepsi Fan Jam, MTV’s Iggy Awards, and A-list concerts is just another day at the office for the Performance Environment Design Group LLC (PEDG), a team of creative professionals who orchestrate structural, scenic, lighting, video, motion, and compositional details from offices in Lancaster, PA and Los Angeles, CA. Their transformational designs have yielded industry accolades, and they are repeatedly tapped by the same clients for their attention to detail and quality work. 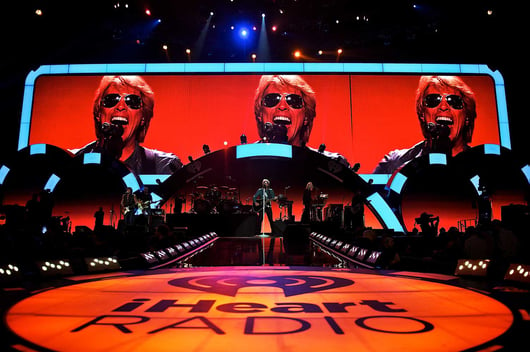 PEDG uses the Vectorworks Designer program to manage all aspects of production, including occupancies, as well as scenic, audio, and video elements. Courtesy of Brian Friedman for iHeartRadio.

We recently spent some time with three members of PEDG's creative team to learn how they employ Vectorworks Designer software to achieve success. The result is a new case study that launches into PEDG's work on Clear Channel’s 2012 iHeartRadio event at the MGM Grand in Las Vegas. The article describes how the design team got the two-day event off the ground while mediating challenges associated with the sheer logistics of accommodating 22 top-tier artists, improving upon the previous year’s show with a similar budget, and meeting a tight timeline. 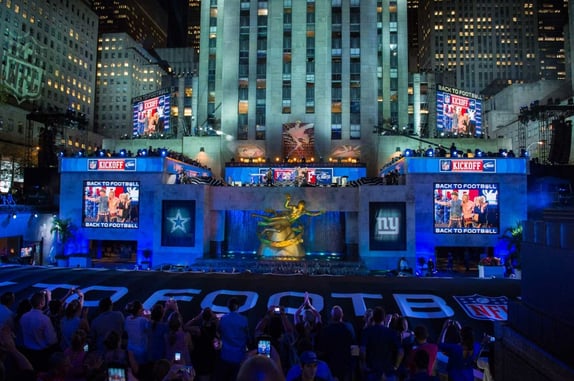 The backdrop for the NFL Kickoff 2012 was New York's world-renowned Rockefeller Center. By night, it was a world unto itself where NFL-logoed lights beamed onto the buildings beyond in dramatic fashion. Courtesy of Meteor Tower.

The story continues, detailing how a mere two-and-a-half weeks before the iHeartRadio Music Festival, PEDG pulled off another equally amazing set with the NFL Kickoff. Marking the official start to the professional football season, this event celebrates the previous Super Bowl winner’s hometown. In 2012, singer Mariah Carey and the band No Doubt made the 2012 show at New York's Rockefeller Center a hit.

Read about PEDG's dramatic transformation of this world-renowned setting and the rest of story by clicking here.