Nemetschek Vectorworks recently showed its commitment to investing in the future by sponsoring Brian A. Fortin and Yuki Nakase’s attendance at the prestigious Broadway Lighting Master Classes (BLMC) produced by Live Design. 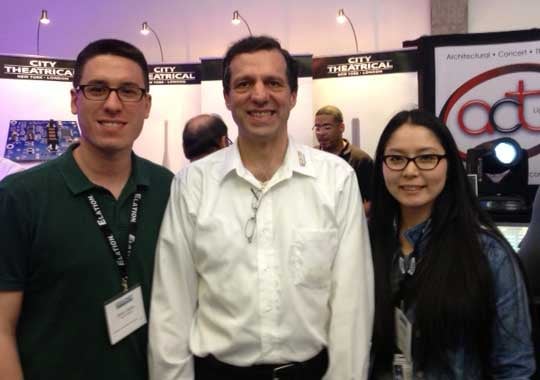 Fortin and Nakase were among a group of students and professionals who heard from Broadway’s best over a three-day period about the creative, technical, and practical challenges involved in lighting New York’s greatest stages. The A-List faculty was led by creative consultant Jules Fisher and featured lighting designers Brian MacDevitt, Robert Wierzel, Jeff Croiter, Jason Lyons, Jane Cox, Justin Townsend, Don Holder, and Beverly Emmons, as well as top scenic and projection designers.

Fortin, who just finished his first year in the MFA lighting design program at the Tisch School of the Arts at New York University, was thrilled to attend the BLMC, saying he “enjoyed the opportunity to meet colleagues and talk about all the different facets of lighting designs.” Some of those topics included the pros and cons of LED fixtures versus traditional sources, finding color solutions before and after the cueing process, communicating with light, and achieving successful collaborations between lighting and production designers.

Nakase, a recent MFA lighting design graduate from NYU's Tisch School, similarly said that attending the BLMC was valuable for her career growth. “I enjoyed meeting people from the theater lighting industry and am grateful for all the good advice I received about starting a career in New York City.” She was also thankful to meet Nemetschek Vectorworks Industry Product Specialist Frank Brault. “It was helpful to hear Frank discuss the 3D rendering capabilities in Vectorworks Spotlight software because I intend to connect my skills using the program with my future career as a lighting designer.” Already, Nakase finds the software crucial to her work creating light plots.

Brault adds that he will continue to mentor Fortin and Nakase, and remain an active resource to them as they embark on lighting Broadway's stages.