Meet Marc Potocnik, one of the “Your World, Reimagined: A Global Design Competition” judges

We are pleased to introduce our next profiled judge of the “Your World, Reimagined: A Global Design Competition.” Meet 3D designer Marc Potocnik, owner and founder of the animation studio renderbaron. Located in Düsseldorf, Germany, the firm produces high-quality 3D animations, visual effects, and television commercials for customers including BMW, Audi, ZDF, RTL, Nokia, Wilkinson Sword, RWE, and Siemens. The small studio offers the high-end quality and reliability of its large competitors and has a production-proven pipeline. 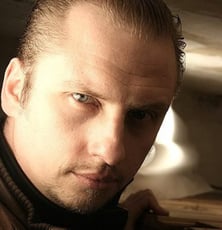 Potocnik studied communications design at the University of Applied Science in Düsseldorf and has more than 16 years of industry experience. He shares his knowledge as a MAXON-certified instructor for CINEMA 4D training courses that focus on lighting and rendering. In his spare time, he works on his non-commercial movie project “Unter freiem Himmel,” which he wrote, directed, and produced. He also creates all the visual effects, as well as performs the editing and compositing.

Potocnik describes his work as a visionary mix of light, shade, and camera movement to produce 3D animations. Holding true to his design philosophy to “keep it convincing, but simple and efficient,” he also finds ways to incorporate an element of surprise in his designs to amaze his audiences.

To Potocnik, revitalization is an important part of architecture, and this is why he is excited to judge the “Your World, Reimagined” competition. “As cities are in a permanent flow of change, reimagining architectural sites is a must,” said Potocnik. “The art lies in the balance of revitalizing sites and preserving the architectural heritage.”

One of his favorite revitalization projects is Düsseldorf’s Media Harbor. Formerly known as the Rhine Harbor, the project is undergoing a transformation into becoming a business and residential district. In 2004, Potocnik worked on an animation for a new office tower for the Media Harbor, and he still visits the location regularly to enjoy espressos.

During this current competition, Potocnik is looking for designs with naturalistic lighting and shading. And, much like fellow competition judge Peter Petz, Potocnik advises contestants to think outside the box. “You don’t need to battle with presets,” he said. “To achieve maximum effect with minimum requirements – that is art.”

To learn more about the “Your World, Reimagined” competition sponsored by Nemetschek Vectorworks, Inc. in collaboration with MAXON Computer, DOSCH DESIGN, Arroway Textures® and AMD FireProTM graphics, visit our website.