The fascinating craft of 3D printing is nothing new to architects. You may even recall Enrico Dini’s D-Shape printer that was dubbed the largest in the world. However, the KamerMaker (RoomBuilder) is reaching new heights as the world’s first mobile 3D printing pavilion that can create entire rooms up to 11’ high and 7’ wide from biodegradable plastic. It’s the KamerMaker’s mobility that sets it apart from the others, allowing it to respond quickly with on-demand architecture for disaster relief situations or temporary housing. 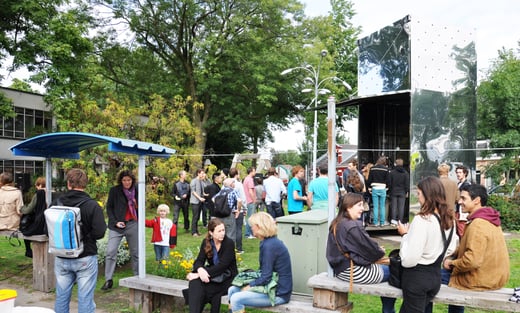 Opening day of the KamerMaker

Currently, the KamerMaker is making history as the key element in the construction of Amsterdam’s first 3D-printed canal house. The house is central to the “canal belt 2.0” project, in which a new and improved canal will unite the city in a circle. The 3D-printed canal house will be sited on the Northern Canal Belt located in the center of the city. 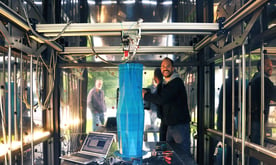 Dutch architectural firm DUS Architects, in collaboration with Ultimaker Ltd., Fablab Protospace, and Open Coop, developed the KamerMaker and initiated the canal house. During the construction process, the DUS team welcomes visitors to the site to watch the 3D printing process, learn the about the KamerMaker, and help raise awareness about the re-use of biodegradable plastics. 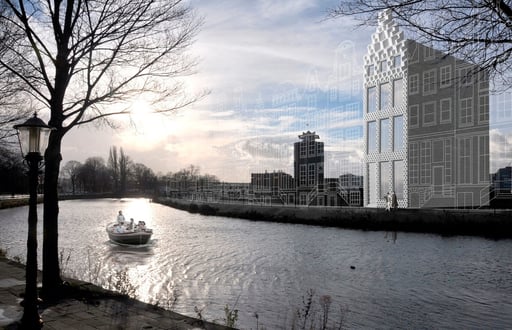 Rendering of the 3D canal house courtesy of DUS Architects

The house’s first room and front façade are scheduled for completion in 2013. But if Amsterdam isn’t part of your travel plans, you can monitor the canal house’s progress here.