This year marks the 30th anniversary of Apple's Macintosh computer. Ever since Steve Jobs unveiled the first Mac in 1984, it has provided the power of technology to some of the world's most creative visionaries.

Apple published a video and a timeline on its website to commemorate 30 years of the Mac. The timeline features influential artists, musicians, educators, and other innovators who have taken their ideas from vision to reality with the help of Mac computers, including stage and costume designer Es Devlin, who used Vectorworks software in her design process to create the 2008 Mika concert at the Parc des Princes stadium in Paris. 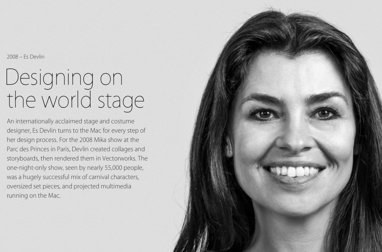 Our company got its start in 1985 with the development of a CAD program (then called MiniCAD) exclusively for the Mac. Today, Vectorworks software is available for both Mac and PC and, while the exact number varies by country, 50-60% of our customers around the world are Mac users. We are driven to provide the tools that allow them to easily capture, develop, and communicate their ideas with accuracy and efficiency, and we look forward to watching the next generation of designers change the world.