We’re excited to announce that the new 2014 version of connectCAD, a Vectorworks software add-on for designing broadcast, audio-visual, lighting, IT cabling, and other connected systems, is now available.

"connectCAD 2014 is a breakthrough release,” said Conrad Preen, managing director at connectCAD Limited. “It’s more powerful than before, yet simpler to learn and even easier to use."

According to the connectCAD website, the new version has completely changed the way it tracks connections. For example, the new Circuit objects tool identifies all connections and allows the designer to move, duplicate, or edit them without having to update them manually. Since connectCAD is completely integrated with Vectorworks software, designers may also reshape circuits by simply double-clicking, just like any other polygon object. Another highlight of the new Circuit objects tool is that it can freely create connections anywhere within the design document, such as within or between layers, or between other documents. connectCAD 2014 is also fully compatible with existing device libraries.

The new connectCAD 2014 add-on also enables a higher level of collaboration among teams during large projects. Now, team members can better track connections between subsystems by using the new Link objects tool, which exposes the interface points to other team members so they can connect to them easily. 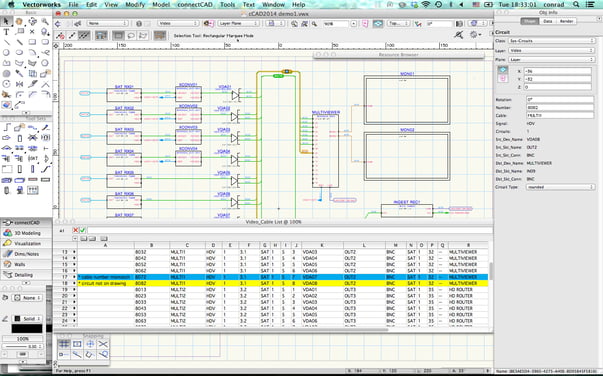 "In this release, connectCAD breaks through boundaries and sets connectivity design free," says Preen. "From new, smooth design workflows to seamless, team collaboration and inter-document connections, connectCAD 2014 provides designers with a tool that can handle projects of any scale without sacrificing the simple, direct approach that has made connectCAD a favorite in the broadcast and audio-visual world."

Visit the connectCAD website or the Vectorworks Add-ons page to learn more about connectCAD and other software available for Vectorworks.