Days are never dull for RIBA Chartered Architect Jonathan Reeves, whose firm, Jonathan Reeves Architecture, offers a mix of architecture, 3D modeling and visualization, and training services. He devotes much of that instructional time to teaching architects how to optimize their work and adopt Building Informational Modeling (BIM) workflows with Vectorworks software, which he also sells. 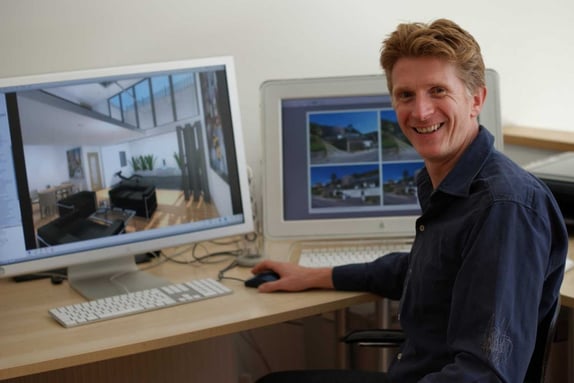 Reeves jumped at the chance to employ his 3D visualization skills for the UK television show Love Your Garden.

It’s an exciting time indeed for this skilled practitioner of 3D CAD and visualization. And while most of his work relates to the architectural process, he recently adapted these skills, creating animations to complement the landscape designs showcased on the popular UK television show Love Your Garden.

The timelines were fast. As soon as the show’s team conceived the design and chose materials, Reeves created 3D models of the hardscapes and landscapes and completed the visualizations. Developing a workflow that would carry him through all eight episodes, Reeves began by quickly modeling each profiled family’s home in Vectorworks Architect and Vectorworks Landmark to produce a 3D model of each garden design shown in scale with the residence. He then used the program’s add-on rendering application, Renderworks, to present his drawings, creating sheets and viewports, coordinated plans, sections, and 3D views for approval before outputting the final animations in Artlantis™ Studio, as required by the Love Your Garden’s production team.

Read more about Reeves' work on the show and some of his favorite episodes in our new Vectorworks user success story.