When Netflix premiers all 13 episodes of Season 2 of its hit U.S. show "House of Cards" today, Art Director Halina Gebarowicz predicts viewers won’t be disappointed. "We are eager to see the new chapters unfold and await the audience reaction to the newly introduced sets that seek to raise the exceptionally high bar set last year,” she says.

The political drama series stars Kevin Spacey as the fictional Francis Underwood, a cunning, South Carolina Congressman and House Majority Whip, who stops at nothing, often plotting revenge, to achieve his goal of conquering Washington, DC. Actress Robin Wright plays his wife, Claire, and often gets involved in her husband’s political scheming.

Nemetschek Vectorworks is excited to announce that some of the show's sets were created with Vectorworks Architect software. In Season 1, for example, 11 set designers collaborated to create scenes ranging from the Oval Office to the Washington Herald newsroom. "Art departments are populated with set designers who use a variety of drafting software, and Vectorworks tends to be chosen by those from an architectural background," says Gebarowicz. 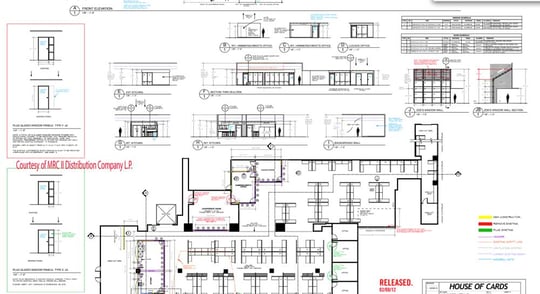 She adds that 3D modeling has taken the place of the physical white models of the past. Among the Season 1 staff, two used Rhino for the pre-visualization work, four used Vectorworks, and five drafted by hand. "Although each had an allocated project, some shared a set, so working out the sharing of files becomes a logistical nightmare of scanning, file conversion, Photoshopping, importing, etc. It’s very frustrating, but there’s no industry standard in film and TV, so one ends up having to be able to adapt and share across all the products."

Gebarowicz found success with Vectorworks Architect software, noting, "the ability to import Rhino files was invaluable" and that she couldn’t be without the Move by Points, Flyover, Connect/Combine, or Mirror tools. "I and others use Vectorworks to create information sheets for multiple departments," she adds. "I import photographs, stripped-down drawings and Adobe graphics, and annotate. It's one-stop shopping." 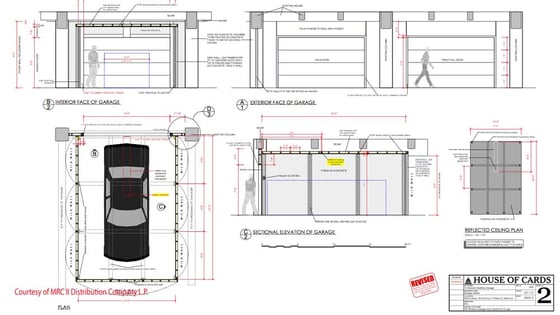 The team's goal, she notes, is to make Washington, DC and the show's stage sets indistinguishable. "We pride ourselves on the fact that some of our built sets are indistinguishable from a real location because of the accuracy and standard of the build," says Gebarowicz. "DC staffers have asked how we had managed to film in certain locations as the sets look so authentic!"

For example, to recreate an existing location like the U.S. Capitol Building, one is not always able to complete a survey due to Homeland Security restrictions, so the team gathered lots of books, photographs, and images of existing floor plans. The set designers had to recreate in minuscule detail from these resources. "The Scale Objects command comes in very handy here to import a photograph or off-scale floor plan, scale it, and check the proportion of a plan or millwork drawing against it to ensure absolute accuracy," says Gebarowicz.

She also notes that the team must often deliver a high standard of drawings in short order. "Combined with the incredibly talented carpenters and scenic painters we employ, CAD shortcuts many steps in the old-fashioned hand-drafting process, and CAD revisions prevent total redraws, which are massively time-consuming. When we only have weeks to produce a set, speed is of the essence."

We're thrilled that Vectorworks plays a part in the success achieved by the creative minds behind "House of Cards." We'll be watching!