We're excited to announce the development of a new plug-in for Vectorworks Spotlight software from MA Lighting, an international leader in computer-controlled lighting consoles, networking components, and digital dimming systems. The plug-in, which will provide a direct connection between Vectorworks Spotlight and the grandMA2 console, is currently in beta status, and MA Lighting plans to release the first version to the public in May 2014.

The grandMA2 has its own built-in visualizer - something that allows the programmer to "virtually" program the lighting before anything is physically set up. This is an important part of a lighting designer's craft. Even small lighting rigs are technically incredibly complex with thousands of channels required to control all aspects of the lighting instruments.

Today's intelligent lighting fixtures allow the designer to control the color, focus, beam, position, and other parameters. "Pre-programming is essential due to the expense and time it would otherwise take to program from scratch once the rig is set up," said Neufeld. "This pre-visualization/pre-programming allows more time at the pointy end of a production week when the pressure is really on to have the show already 'in the can’ and thus be able to finesse and detail the lighting on site during last rehearsals." 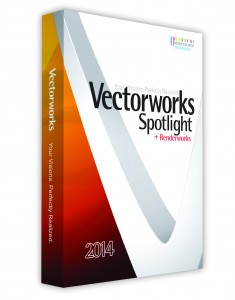 Once this plug-in is available, lighting designers will be able to export lighting instrument data from both Mac and PC versions of Vectorworks Spotlight, and then import that data into grandMA’s built-in visualizer to do their pre-programming work.

Neufeld said the beta version of the plug-in was tested by the Sydney Opera House for the recent Sydney Festival, and the results were fantastic. "All the patch information, channel, DMX, circuit and dimmer, and location fields went directly from Vectorworks Spotlight straight into to the grandMA2 visualizer," he said. "This seamless throughput from Vectorworks Spotlight to the programming in the grandMA visualizer is a marriage made for the stage!"