A Philadelphia Problem Solver Carves Out Spaces to Light

While lighting designer Joshua Schulman spends 90% of his time in the theatre, he occasionally steps outside this world. In fact, we recently published a new case study that examines Schulman's exploration of time travel through an interactive exhibit for the Philadelphia International Festival for the Arts (PIFA) and his work illuminating abandoned and obscure locations for the Hidden City Philadelphia Festival.

Held over a three-week period at the Kimmel Center for the Performing Arts, PIFA 2013 featured live performances, a staged musical, educational programs, and a 100-foot-long time machine experience — a sculptural light, sound, and video installation that served as the festival’s hub and was enjoyed by an estimated 100,000 visitors. Schulman modeled and rendered the exhibit plan and its surrounding program space in Vectorworks Spotlight with Renderworks software. “We wanted users to be totally surrounded by crystals, so I mapped them individually in Vectorworks first to make sure no one would hit their head," he said. "Next,  I rendered various options to examine different views and ensure success. Based on the modeled sightlines, we made accurate design decisions well before installing the spiral, which saved time and money.” 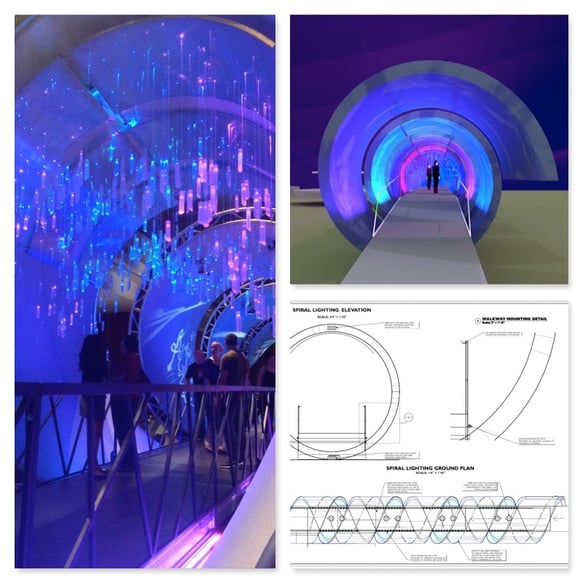 Such problem-solving capabilities also proved valuable for Schulman's work as lighting director for the six-week-long 2009 Hidden City Philadelphia Festival, which illuminated nine abandoned, obscure, or inaccessible locations with contemporary, site-specific works. He designed shows at five of the festival’s nine locations, including two churches where his team put in a simple system of noninvasive lighting to highlight art displays. His work at three larger sites was more involved. For example, the Royal Theatre hosted a live performance of an original work, “Re-Sounding,” by world-class musicians paired with a film and video installation. The facility had not been used since 1970, but Schulman transformed the site by designing lighting that highlighted the decay of the space while bringing attention to some remaining architectural details. The building was in such a state of disrepair that everyone had to wear hard hats, including the audience!

Award-winning Joshua Schulman Lighting Design has left its mark  on the city of Philadelphia because Schulman knows how to bind the various visual elements of a production with light as the proverbial glue. Visit our website to read the complete Joshua Schulman user success story and learn more about these two projects.