We recently bolstered our growing library of Partner Product solutions, so that you can experience conceptual 3D models in a new way. Using Inglobe Technologies’ AR-media™ plug-in for Vectorworks software, designers, architects, and engineers can take advantage of augmented reality technology to virtually present and interact with georeferenced models on both iOS and Android devices. Additionally, you can visualize designs directly from your desktop computer while in the office with a webcam and printed custom marker. 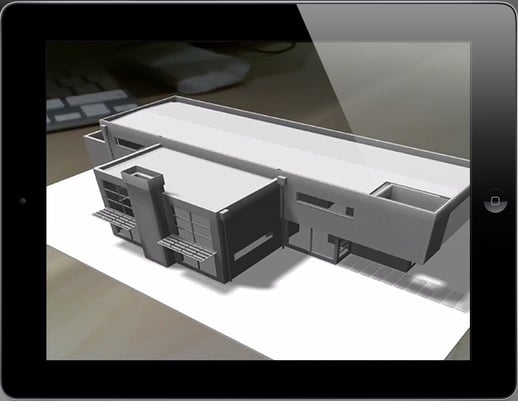 “Over the last year, I’ve been playing extensively with the AR-media suite, mainly for Vectorworks,” said James Russell, CAD design lecturer at the Victorian College of the Arts, University of Melbourne. “AR-media makes the often daunting transition from the virtual world to the physical world seamless, which, to the foreign observer, seems like magic.”

Users like Russell are finding success with the AR-media plug-in for Vectorworks and its ability to demonstrate how a design will engage with a given site. Plus, features like real-time marker tracking, custom marker creation, and real-time sections and shadows help create a virtually interactive and unique presentation experience for each project.

Inglobe Technologies’ CTO Alessandro Terenzi says his company is planning to release a new version of the plug-in and free player at the end of this summer. Users can expect several new features, he says, such as complex projects configurations (i.e., projects can be organized in arbitrary ways for visualization and presentation purposes), an advanced real-time tracking engine that allows people to use photographs and blueprints as tracking targets, as well as any real object ranging from those that are small in size to those that are large like entire buildings or construction sites. There will also be rendering quality and performance improvements, and advancements to the integration capability of your designs with the Vectorworks Graphical User Interface and workflow. View a demo of some of the upcoming features.