3 Reasons Why Designers Should Focus on Resiliency

Having joined the site design industry over 25 years ago, I’ve witnessed several evolutions in the types of issues designers tackle when planning projects. In the late 1980s and early 1990s, designers worked Integrated Pest Management into the specifications for new projects and included it in many site maintenance contracts. Right after 2001, security became their main focus followed by environmental sustainability.

Today, the hot topic among site and community designers is resiliency, which is the practice of designing projects to be resistant to possible variations in an environment. In other words, if your design is properly resistant to adverse conditions, it will remain functional after a potentially devastating change occurs. (Economic and demographic changes also fall under the umbrella of resiliency planning.)

The topic of resiliency has risen to the forefront following recent reports of public spaces that failed due to a calamity event. For example, heavy rainfall in April 2014 caused a Baltimore, Maryland street located along railroad tracks to sink into the ground, damaging cars and displacing residents for weeks. Had the street’s design or an assessment by City officials the year prior addressed subgrade flash flooding, this incident might have been prevented. 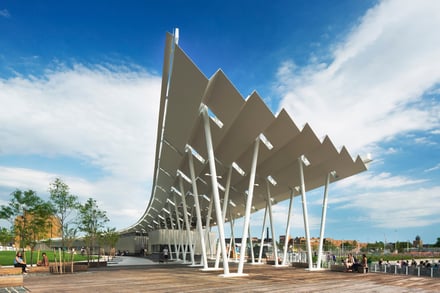 In an ironic example, the now completed first phase of Hunter’s Point South Waterfront Park in New York City was “storm tested” even as it was being constructed. The site expects to take on rising sea levels due to climate change, and while the architects and landscape architects integrated resiliency into the park’s design, along with the nearby infrastructure and roadways, they likely did not expect the storm event that Hurricane Sandy delivered during construction. Thankfully, the park bore the impact, and the finished space is all the better for it. Projects like this help all design players see the need for resiliency in our growing urban ecology and recognize its success.

A design can be also resilient to more than just the environment. Vectorworks Landmark user Adrian McGregor, director of Australian landscape architecture and urban design firm McGregor Coxall, incorporated cost efficiencies into his design for Ballast Point Park, assisting in the economic resiliency of the project. McGregor reused post-demolition oil tank metal sheets that existed on the site to create a structural frame onto which he incorporated wind turbines. We often view self power-generating features as improving only sustainability or energy efficiency. However, when considering that a community could potentially forgo access to the electrical utility due to economic setbacks, or that a physical breach in connectivity could occur and disrupt the functionality of the park, features like these wind turbines make the park resilient to energy crises.

I encourage readers to learn more about how various design industries are embracing resiliency, including and beyond flash floods and storm surges. There are many ways to incorporate resiliency into project designs, and design technology supports it. Whether integrating GIS data such as flood mapping into your site design or model, or maximizing the analytical opportunities within smart, hybrid objects, smarter design with intuitive and intellectual tools may be the best way to study how disaster-proof your project could be. Start planning your projects to be resilient against future problems with Vectorworks software and our many plug-ins from industry partners.