"The Boxtrolls" Hits US Theatres with Sets Designed with Vectorworks Software 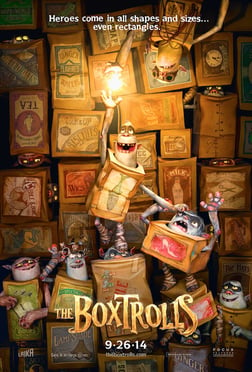 When a community of quirky, mischievous creatures hits the big screen in the nationwide US opening of The Boxtrolls this weekend, you’ll have Oregon-based LAIKA to thank. Known for its Academy Award-nominated films ParaNorman and Coraline, the animation studio has created a stop-motion, hand-drawn, and computer-generated movie in which young people discover who they are and what they want to be, learning that the things that define us most are the choices we make and the people we touch.

Based on Alan Snow’s book Here Be Monsters, and created with 79 sets and over 20,000 handmade props, The Boxtrolls is the biggest production ever made in stop-motion animation. “I love the medium, and this art form, because it combines so many artistically wonderful elements: illustration, painting, photography, lighting, sculpting, and music,” says Lead Animator and Producer Travis Knight.

Joining a star-studded cast of voice talent including Sir Ben Kingsley, Isaac Hempstead Wright, and Elle Fanning, Vectorworks software plays a role in the film, too. Set designers used the program to construct 3D models and develop them into construction plans.

A stop-motion feature is comparable to a live-action feature in that there are physical sets that must be built and dressed, as well as performers who need to be properly coiffed, clothed, and lit – and given proper direction. Art Director Curt Enderle says, "Set designers work from 2D illustrations and develop scale and style within Vectorworks to generate drawings for the construction shops -- just like the real world, only smaller, about one-sixth of human size."

“We aspire to tell stories that are visually stunning, that have a patina of beauty, but more importantly have a reservoir of meaning,” adds Knight. “Our films are thought-provoking, keenly felt, progressive, and just a wee bit subversive. We tell stories that speak to us, and that we hope connect in the same way with audiences all over the world."

We're currently developing a case study with the artisans at LAIKA and have no doubt that we'll all feel wonderfully connected with The Boxtrolls as we discover the magic behind the studio's success and how Vectorworks software supports their creative endeavors. Stay tuned, and we'll see you at the movies!