Some architectural awards recognize a single building, while others distinguish designers for their work in a specific area, such as the use of natural light, skylights, façades, or even using architecture as a marketing tool. However, as award juror Juho Nyberg points out, for younger architects looking to make their mark in the industry, the work they do to support themselves early on in their career might not be reflective of their true talents because their work isn’t always built.

The Foundation Award, therefore, was created to honor young Swiss architects and was instituted by ComputerWorks AG, the Vectorworks distributor in Switzerland, as well as HP Switzerland, web-based culture channel art-tv.ch, the online platform swiss-architects, and Nemetschek Vectorworks. In the five years since its inception, the award has grown in prestige. Plus, the addition of architectural magazine Hochparterre and the Swiss Architectural Museum (S AM) to the funding body further validates the already esteemed award.

This year’s winner, Focketyn del Rio Studio Basel, embodies the visionary qualities that the judges look for in the vibrant young architectural scene in Switzerland. Their project, the Kaserne Basel, impressed the panel of judges with their design principle of “soft radicals,” which entails incorporating the existing values of a building or area into project while simultaneously destroying what existed before to create something new. By tempering their radical changes with influences from the past, the designers utilize their philosophy in constantly evolving ways. 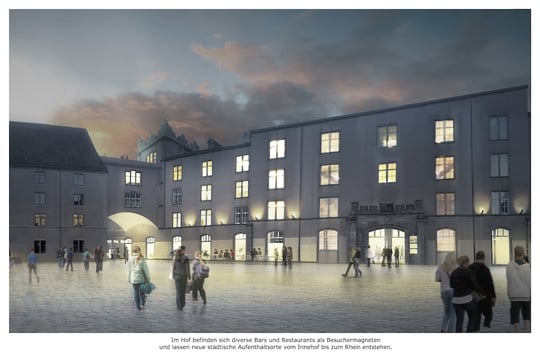 The architects describe their design for the Kaserne Basel as a "breaking" of what was there before in order to build a better building.

To learn more about The Foundation Award, check out their website.