Though he comes from a long line of artists and craftsmen, Forest Dickey was initially uncertain that he could turn his passion for woodworking into a career. But, being a self-declared stubborn individual, he eventually convinced himself to just “go do it, and see if it works.” Dickey’s determination paid off when he founded Varian Designs, a custom, artisanal furniture company, where he fuses elements of his Californian surroundings with visions inspired by his Scandinavian heritage to create heirloom-quality pieces.

While Varian Designs’ tagline, “Designed for you. Built for your grandchildren,” highlights the enduring beauty of Dickey's work, his stylistic approach is constantly evolving. “Early on, the aesthetic was very architectural. I was looking at how the timbers were being joined together with steel to allow for larger buildings and structures,” he says. “My newer stuff is much more inward-looking. It’s less influenced by architecture and exterior things and more just coming straight out of my head.” Wherever he pulls his ideas from, the furniture he creates attracts attention. Dickey’s work can be found in prominent homes and businesses in the San Francisco Bay area and beyond, as well as on the small screen. (Fans of the hit NBC show “Parks and Recreation” saw Dickey's Lofn Chair as a prop in one episode.)

To meet the needs of his high-caliber clientele, Dickey uses Vectorworks Architect’s 3D modeling capabilities, relying on a workflow that lets him refine hand-sketched designs and record revisions that he makes to furniture prototypes. Dickey enjoys both the flexibility of the software’s workflows, as well as the integrated Renderworks application that allows him to create design renderings that are crucial to getting client buy-in. And by exporting his DXF and DXG files to a local 5-Axis CNC operator, Dickey can create intricate design details in a matter of minutes. “CNC technology isn’t doing anything that the hand can’t do; rather, it’s just making it much easier. So this means that Vectorworks software lets me design the way I think, and make my workflow cheaper and faster.” 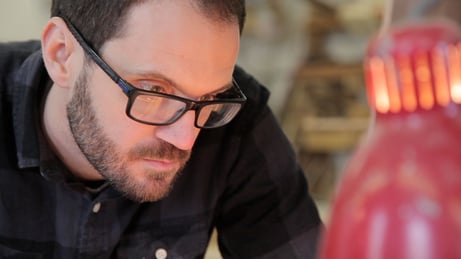 To learn more about the work of Forest Dickey and Varian Designs, check out his success story.