While originally used with Vectorworks software to understand crowd behavior during building evacuations, SimTread is now proving its capabilities as a tool for simulating whole city evacuations during natural disasters like tsunamis and the Great East Japan Earthquake in March 2011. 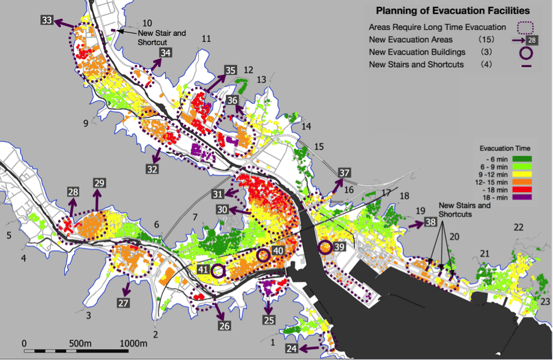 Dr. Yoshiyuki Yoshida, who started the research and development of SimTread at Takenaka Corporation in collaboration with Waseda University, was the first person to apply the software for urban scale simulation. After this initial discovery, the SimTread research team has been experimenting with how the software can foster the design of safer cities. One result of these efforts is the Nigechizu Project, a volunteer program that works with communities to create evacuation maps of towns based on the effects of previous tsunamis and the time it takes people to move to safer places.

Also, the Journal of Disaster Research issued a special edition in September 2014 dedicated to the Great East Japan Earthquake, to which Yoshida, other SimTread researchers, and I contributed the results of our studies. This paper includes a detailed description about SimTread, beginning with its original conception to its validation results, as well as a proposed new methodology for understanding how to design a city that can be safely evacuated. This new methodology outlines the framework for how long a given person would take to reach a safe place and allows for adjustments based on things like age and crowd density. Also, the map informs which part of the city needs additional escape routes or emergency shelter capacity.

The map was drawn with Vectorworks software because of its flexibility and presentation capabilities. A simple VectorScript program read the file of the simulation result and created circles at the origin points for each of the 12,034 people with records attached indicating how long it took them to evacuate. The circles are colored with the “Modify By Record” command, which turned the tedious task of organizing the data into a creative work for presentation. 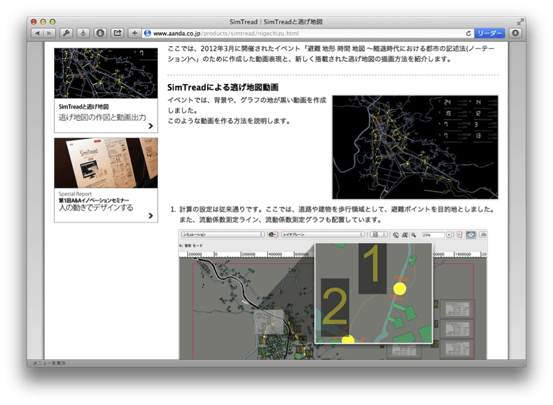 Some of the features that emerged during this research study have already been implemented in the software, and some are still to come. As Vectorworks 2015 software became 64-bit, so too did SimTread, which is now capable of calculating larger areas, further extending its original functionality from performing crowd simulation and traffic flow for interiors to simulating the evacuation of an entire city. We can’t wait to see more architects and city planners enlightening their designs by studying human behavior with SimTread.