Inspiration: Breaking the Blueprint for Beachside Retreats in the Hamptons

As founders of the architecture practice LEVENBETTS, David Leven and Stella Betts recently deconstructed beachside living in the Hamptons into three spokes in its 36SML House in Amagansett, New York, creating distinct spaces and unique experiences for its owners and their guests.

The 8,000-square-foot home rotates out from a central point into separate wings, each serving a different purpose. The first level divides the kitchen and dining area, the living space, and the garage, respectively, the later being separated even further from the main spaces by a driveway that cuts through one of the wings of the house. The second floor includes a wing containing the parents’ bedrooms, another wing for the children’s room, and another for guests. 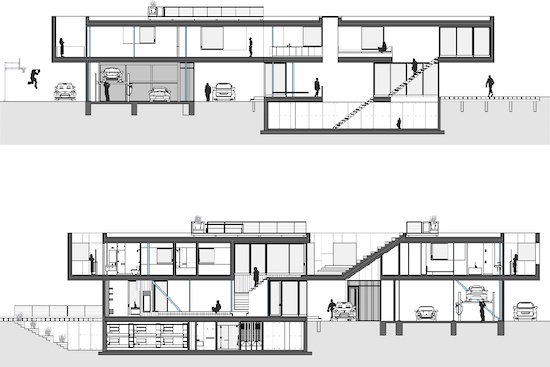 By segmenting the building itself, the designers also reimagined the typical front yard/back yard paradigm. 36SML’s 1-1/4-acre square lot is portioned into areas for parking, a garden, and a pool, with each space clearly defined by the form of the home.

Leven and Betts modeled the 36SML House with Vectorworks Architect software, keeping the notion of how the homeowners would experience the space in mind as they turned their inspiration into a realized design. “Strong connections to the outdoors, maximization of natural ventilation and minimization of air conditioning, lots of light, and the ability to have areas of intimacy within the open house were part and parcel of the charge for this project,” says Leven.

This seemingly dichotomous desire for both openness and privacy resulted in a large but informal house where family and friends have the room to do anything they desire, encapsulated by an innovative floor plan that encourages them to examine the relationships between spaces from new perspectives.