Bruce Rodgers, founder and president of Tribe, Inc., designs entertainment events ranging from awards ceremonies and music festivals to political conventions and television shows. But perhaps the biggest of these events, and certainly one of the most viewed, is the NFL Super Bowl Halftime Show. Producing a live show on such a grand stage, and especially with famous headliners like Coldplay, Beyoncé, and Bruno Mars, takes expert timing, a skilled team, and the right tools. Luckily, Rodgers has all of those things and the experience to bring them together.

“We want to give the artist the best show we can so that they can give the audience the best show possible,” Rodgers says. “This year’s show was a distinct challenge since it took place at sunset. It’s been 13 or 14 years since the Super Bowl Halftime Show was held in the daytime.”

Rising to the challenge of the halftime show is nothing new to Rodgers; he’s been a part of the Super Bowl halftime show design team since the Prince performance in 2007. In fact, his team began planning out how the show would incorporate the variable of sunlight before the artists were even chosen.

“A lot of the original art we did wasn’t tied to a specific artist,” Rodgers says. “We did a lot of preliminary studies to map out how the stadium would look from different angles and distances, as well as a lot of sun/shade studies to look at the how the stands would cast shadows on the field.”

Factoring in the position of the sun was critical to pulling off stunts like the audience participation experience with cardstock. With the sun setting at 5:40 p.m. and the show estimated to occur around 5:00 p.m., the issue of natural light also affected what kinds of lighting and pyrotechnics could be used reliably. 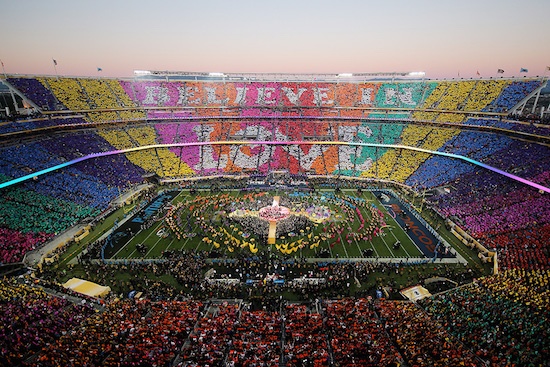 “Using fire during the day leaves a lot of residual smoke visible,” explains Rodgers. “We looked at ways to potentially make the smoke colorful, but that’s actually pretty toxic. And, you have to worry about the effect of heat on the grass in the stadium. That meant that a lot of the color in the show had to come from the set itself, especially because you can’t use very large, heavy lights because they leave rivets on the football field.”

While all of these concerns may seem like a lot to keep in mind, they don’t even take the artists’ creative teams into account.

“For every artist that comes on board, this is the epitome of performance for them,” Rodgers says. “They bring their whole team with them and can’t help but want to take part in the creative process. We’ve learned to listen to every idea and protect the artists’ input as much as possible while still meeting our staging and logistical needs.”

Chris Martin and the Coldplay creative team looked at Tribe’s initial massing studies and decided that they wanted a kaleidoscope design for their set – something that was colorful and fit with the branding of their latest album but could also be pulled off during a daytime show. The visually heavy, kinetic show that resulted from their discussions showed Tribe’s dedication to realizing their artists’ visions, as well as the artists’ trust in the halftime show team. 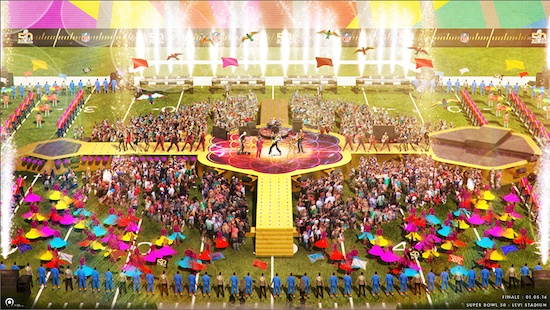 “It can be hard for a creative team to give up control to us,” Rodgers says. “But Chris was great. He said from the start that we were chosen to create the halftime show for a reason.”

Martin wasn’t the only performer to have his own needs when it came to design. Rodgers noted that Bruno Mars needed the surface of the stage to be slick for his sliding dance moves. Normally this would be easy to accomplish; however, the slick parts of the stage had to be coordinated with areas that were textured to compensate for Martin’s penchant for jumping while performing.

Further, Beyoncé made a last-minute decision during the performance rehearsals to make her big entrance out on the field itself, rather than on the stage. As a result, the stage had to be shortened, and the lights had to be adjusted just a week before the Super Bowl.

Perhaps the wildest part of this design process was that the team of Vectorworks software users at Tribe wasn’t able to send finalized set designs out for building until four weeks before the show due to last-minute design changes, which was the tightest timeframe they’ve ever had before. Learn more about this intense process by watching Rodgers’ Live Design webinar: Exploring the Halftime Show with Bruce Rodgers.