The Vectorworks 2016 software line, released in English back in September of 2015, has been doing some serious globetrotting over the past few months. After releasing versions in Dutch, French, German, Polish, Italian, Norwegian, Spanish, and Portuguese over the past few months, the more than 100 new features and updates made available in this release are now available in Japanese and Chinese. 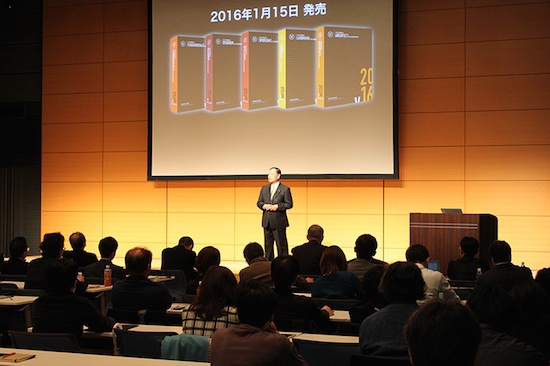 Eiichi Kawase, president of A&A Co., Ltd., speaks at one of the Vectorworks 2016 launch events in Japan.

Vectorworks executives Sean Flaherty and Dr. Biplab Sarkar traveled around the world this past January to be a part of the Japanese rollout, which included launch events hosted by A&A Co., Ltd, the Vectorworks software distributor in Japan. The tour visited major cities across the country, from Tokyo, Osaka, and Fukuoka to Sendai and Sapporo.

“With this new version, Vectorworks can adapt to new design methods, providing an effortless, interoperable, and open environment,” said Eiichi Kawase, president of A&A Co., Ltd. “Once again, the release includes the implementation of many user-requested features.”

Starting today, April 8, launch events for the Chinese-language version of Vectorworks 2016 will start to take place all over China. Hosted by Mad Macs Technology Distributions Limited, the Chinese distributor of Vectorworks software, rollout events will be held in Shanghai (April 8), Beijing (April 12), Tianjin (April 13), Nanjing (April 15), Suzhou (May 8), Hangzhou (May 11), Wuhan (May 13), Chongqing (May 15), Guangzhou (May 17), and Shenzhen (May 19). Attendees will have the chance to pick up some awesome Vectorworks swag and be entered to win licenses of Vectorworks Fundamentals 2016 at the events in Beijing, Shanghai, and Guangzhou.

If you’re in China, you can sign up to attend any of the launch events. And if you haven’t upgraded or purchased your copy of Vectorworks 2016, reach out to your local distributor or head to the Vectorworks 2016 page.