The acts of directing people through a museum, expediting fans’ exit from a football stadium, and simulating the evacuation of entire cities for natural disasters all share one common thread: they benefit from SimTread pedestrian simulation software. Developed by the Japanese Vectorworks distributor A&A Co., Ltd in partnership with Waseda University and Takenaka Corporation, this Vectorworks software plug-in tackles an array of crowd control needs such as analyzing pedestrian traffic flow, evaluating evacuation times, and verifying a design’s circulation patterns. With version 2.4 released today, anyone responsible for disaster preparedness, public safety, facilities management, or event, municipal, or campus planning will be better poised to handle circulation studies and flow analysis. 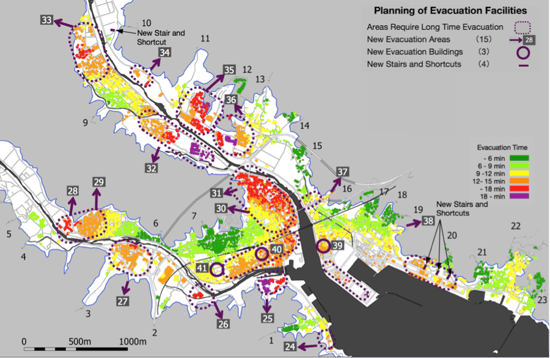 A SimTread software simulation of a city’s evacuation time

"There is great power in SimTread's capabilities, as it can save lives, so it’s of the utmost importance that the program continues to be improved," said Dr. Takeshi Kimura, manager of research and development at A&A. "The latest version keeps with this mentality and includes several beneficial visualization features that can help those responsible for disaster preparedness, public safety, facilities management, and event planning, all with the point of safety at the forefront."

Three key enhancements made in the latest SimTread release are:

SimTread 2.4’s Create Measurement Result command is shown on the right in comparison to the previous version on the left.

SimTread 2.4’s Plot Travel Time command is shown on the right in comparison to the previous version on the left.

"Among SimTread 2.4's many updates, the improved graphical presentation of the program’s results will help articulate the benefits of large-scale evacuation planning," said Jeremy Powell, product marketing director at Vectorworks. "These new visualizations came from our research and consultancy work, so we hope it will benefit other users, as well."

To learn more about SimTread software’s capabilities, visit our partner page. Or, if you’re attending #AIACon16 in Philadelphia on May 19-21 come by our booth #2345.