While you might think the star-studded cast and crew of Game of Thrones hogged the spotlight at this year’s 86th Emmy Awards, Vectorworks software users left the second night of the ceremonies with their share of awards. Let’s take a moment to congratulate these people who work behind-the-scenes to create the inspiring productions and lighting designs that took home top awards.

David Korins, Production Designer
From designing concert sets for music artists such as Kanye West and Mariah Carey to tackling sets for Broadway shows like “Hamilton” and “Dear Evan Hansen,” Korins has a long, impressive resume. In 2004, he founded David Korins Design, a multidisciplinary design and experience firm that specializes in creating detailed, 360-degree worlds. It was this history in bringing full, detailed worlds to life that helped him create the immersive world of “Grease: Live!” and excel at live-staging a TV musical. “When we were done with it, we knew exactly what the show was going to look and move like,” he told Broadway Box in a recent interview. “Right now, I am shivering with anticipation for the next one…because I loved the medium so much.”

Joe Celli, Art Director
Joe Celli is an award-winning production designer and art director for television, film, and theatre. Previously, he won three Emmys for Outstanding Art Direction for Variety, Nonfiction, Reality or Reality-Competition Programming for his work on the 86th, 82th, and 80th Academy Awards. Currently, Celli is working on “Hairspray Live” as an art director and recently returned from China where he worked on Zhang Yimou’s upcoming film, “The Great Wall,” for nine months. 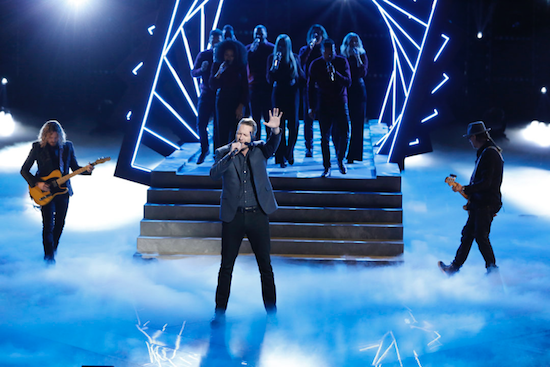 Oscar Dominguez, Lighting Designer
Oscar Dominguez started his career 26 years ago in a small Los Angeles studio. Working his way up doing odd jobs, he eventually became a gaffer for award-winning Lighting Designer Simon Miles. Now as founder and head designer of DARKFIRE INC., Dominguez brings home his third Emmy for “The Voice.” His previous projects include lighting shows such as “The Bachelor,” “America’s Next Top Model,” and “Are You Smarter Than a 5th Grader?”

Daniel K. Boland, Lighting Director
Daniel K. Boland has worked in the Los Angeles entertainment industry since 1995, primarily specializing in lighting design for musical artists’ tours, like Eminem and Blue Man Group, a background that is well-suited for his work on “The Voice.” This is his third Emmy and fifth nomination for his work on the show, which he has been with since 2012. Currently, Boland is CFO and a lighting designer of Team Boland Productions. Previously, he worked for NYXdesign as a lighting programmer.

Craig Housenick, Lighting Director
Craig Housenick is a lighting designer and director for film, television, and live events. Owner of CMH Design and winner of three Emmy’s for his work on “The Voice,” his previous work includes being lighting director for “The Taste” and lighting programmer for the 19th Annual Critics’ Choice Movie Awards. After working on shows like “Jimmy Kimmel Live” and “American Idol,” Housenick joined “The Voice” in 2012.

Johnny Bradley, Media Server Operator
Winning his second Emmy for Outstanding Lighting Design as a media server operator, this is Johnny Bradley’s third nomination for his work on “The Voice.” In 2014, he was nominated as a lighting director. Bradley’s resume includes work on shows such as “Wipeout,” “The Bachelor,” “Shark Tank,” and the film “Oz the Great and Powerful.”

Travis Hagenbuch, Lighting Director
A 2007 graduate of University of Cincinnati’s College-Conservatory of Music, Travis Hagenbuch discovered his love of lighting at ten years-old, building lights from plywood and spare parts. Now, he is on his fifth Emmy and seventh nomination. Hagenbuch specializes in lighting for live, televised events, and his previous experience includes the Academy Awards, the Grammy Awards, and the 2010 Olympics opening ceremony. Currently, Hagenbuch works as a lighting designer and director for Full Flood, Inc.

Madigan Stehly, Lighting Director
California-native and University of Southern California graduate Madigan Stehly claimed his first Emmy for Outstanding Lighting Design this year as a lighting director. He has a background in musical theatre and his previous work includes the 66th Primetime Emmy Awards and seasons 10 and 11 of “So You Think You Can Dance.”

Will Gossett, Lighting Director
Will Gosset is currently a lighting director of “Greatest Hits.” He graduated from Carnegie Mellon University with a degree emphasis in lighting design and has interned with leading companies in the lighting industry such as Full Flood, Inc., 22 Degrees, and Chris Werner Design. This is Gosset’s first Emmy nomination and award.

Congratulations to all the winners and nominees!

You can explore the full list of winners on the Emmy Awards website and read more about other award-winning entertainment designers here.