Passion, Expertise, and 3D at the Opening of the Olympic Games

The scene is the iconic Maracanã Stadium in Rio de Janeiro, Brazil, completely crowded, where in a few moments the show will begin. The experienced set designer of Brazilian scenography company P&G Cenografia, Altamir Júnior, huddled in his small control cell inside Box City with coordinators from other disciplines, finally receives the long-awaited signal via radio: "Everybody get ready!" And the show begins: the Opening Ceremony of the Rio 2016 Olympic Games. 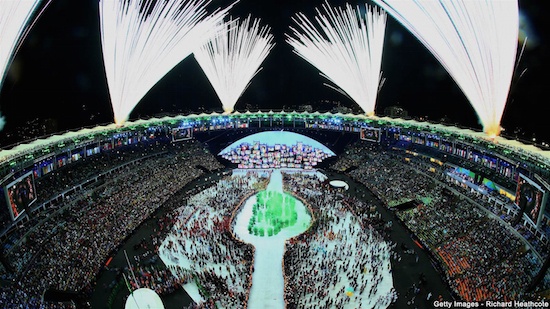 Praised by critics from the national and international press, the ceremony was broadcasted live on TV and streamed on the Internet by various networks around the globe, drawing the largest audience for an opening ceremony of any Olympic Games.

A CHALLENGE FOR EXPERIENCED PROFESSIONALS

Something of such visibility and notoriety could definitely not be run by amateurs. For this reason, the Organizing Committee of the Rio 2016 Olympic and Paralympic Games held an international competition to select the best companies in the world to be responsible for the executive and artistic production of the Olympic and Paralympic opening and closing ceremonies.

Cerimônias Cariocas 2016 won the competition and in turn hired P&G Cenografia to execute the most important scenic element of the opening ceremony of the Olympic Games: Box City, as nicknamed by its creators.

Among other activities, P&G was responsible for the construction detailing of Box City, the development and production of prototypes for systems and materials, the testing for and identification of failures or inadequacies, and the presentation of technical and operational solutions for the construction of the scenery. P&G was also responsible for the operation of Box City during rehearsals and the ceremony.

BOX CITY — A CITY AND ITS CHALLENGES

Conceived by the award-winning British scenographer Es Devlin and production designer and scenographer Daniela Thomas, the idea of the Box City was both simple and challenging. As the name suggests, the scenery consisted of several boxes (or scenic cells) that simulated a city, acting as both a mutant scenario and a multi-level stage, where the dancers climbed to perform choreography.

The internal structure of the boxes, which allowed for circulation of the dancers, artists, and professionals, was made of box trusses and metalon frames covered by different "skins" made of printed vinyl canvas, enabling the formation of various integrated scenarios throughout the ceremony.

At first glance, the assembly of these boxes didn’t seem so challenging, until the following five points were considered:
1 - The boxes needed a structure sturdy enough to support a group of performers jumping and dancing on top of them.
2 - The boxes needed to incorporate a mechanism for exchanging the "skins," with a total of seven skins per box.
3 - The whole structure of Box City needed to be mounted on the side grandstand of Maracanã Stadium. In other words, the installation had to be very carefully planned.
4 - The whole complex of Box City needed to be composed of 73 boxes.
5 - The mosaic formed by the images on the boxes needed to be seen with minimum optical deformation by all attendees in the stadium.

And all of this had to be considered alongside the natural tension that comes from planning an event that will be broadcast live to billions of viewers around the globe.

Even for the experienced scenographers and stage designers, Altamir Júnior and Omar Muro, who coordinated the assembly of Box City, this was not an ordinary mission. Despite their experience designing mega-events and their assemblies, they knew they were facing a great challenge.

"The process of assembling the box truss structure started from the center and then spread sideways one by one as the adjacent box levels were checked. Often, the levels did not match because of the gap in the stadium stand, which required us to review much of the design to detect and solve the problem," says Muro. "There were several difficult pre-assembly phases, such as researching and testing the most suitable materials and systems for building Box City, as well as setting the upper levels of each box. The assembly process also took longer than expected due to the precision we were trying to achieve between each of the modules. If we had made a mistake during this process, the rest of the structure would have been compromised. That's why I supervised the assembly process of the box truss."

The entire construction process was carried out in P&G workshops under the direction and supervision of the experienced construction manager, Julio Gomes.

“It was a huge task,” remarks Gomes. “We received around 300 technical drawings and details in Vectorworks files from the team of architects and designers, which were immediately analyzed and then printed and distributed to each department in the workshop. About 300 workers, among them carpenters, mechanists, painters, electricians, and covering specialists, translated the technical drawings into reality.”

Considering all the conditions and challenges mentioned, both the manufacturing and assembly of the structures had to be very well planned, necessitating a high-performance 3D design software that would allow for rapid modeling and, at the same time, generate detailed documentation. That’s where Vectorworks software enters the scene. 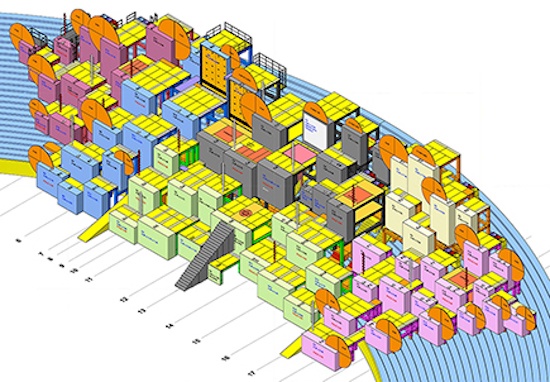 Vectorworks software has come a long way since P&G Cenografia began using it, Designer and Creative Director Paulo Neves recalls. “Vectorworks has been used at P&G since it was called MiniCAD in 1996,” said Neves. “When we started using computers in the company we adopted 2D vector drawing software like FreeHand and Corel. They were not advanced software, but they allowed us to both illustrate projects, as well as to make technical drawings, in a more intuitive way. And here was where Vectorworks won us over, by allowing us to generate more precise drawings through the same easy vector drawing techniques.”

“Additionally, Vectorworks’ state-of-the-art 3D modeling capabilities were also a key determinant of its continuous adoption by P&G,” Neves continues. “Today, we use 3D modeling in all our projects across the board, for initial studies, rendering, and as support for the assembly simulations of events.”

“The versatility and speed in 3D generation using Vectorworks has had a great impact on the actual simulation of the construction and assembly of parts,” adds Muro. “Vectorworks also assisted in the manufacturing and assembly of the box truss, tubular structure, flooring, rails, ladders, ramps, and finishings, as well as the detailing during the pre-assembly and manufacturing stages, simulating in 3D all the details of the metalon boxes with all the mechanical parts of the curtain systems and what could happen to the parts during construction and assembly.”

According to Muro, with the high volume of work and the tight schedule, another important point was the software’s short learning curve, meaning that the trainees and architects who had never used it before could learn the software very quickly. "In less than a week they were already drawing and detailing in Vectorworks," explains Muro.

Júnior assisted every minute of the assembly process, from initial studies to the final delivery. "One of the biggest challenges at Box City was combining an artfully conceptualized design with the reality of manufacturing,” explains Júnior. “The convenience and productivity of being able to model in 3D and getting detailed technical drawings without having to change programs was an essential factor. In the specific case of Box City, due to the complexity of the project and the interferences, both with the architecture of the stadium, as well as with the scenic elements, it would have been impossible to work without a perfect 2D/3D integration."

"Taking into account schedule, budget limit, zero tolerance to errors and inaccuracies, intuitive 3D modeling technology, and even standardization between different file types, Vectorworks was essential at every stage of the process," concludes Júnior. “Using Vectorworks, we achieved greater agility from the beginning of the design to the generation of the documentation for manufacturing.”

Abel Gomes, an experienced set designer, director and founder of P&G Cenografia, and president of the consortium Cerimônias Cariocas 2016, recalls the success of the opening. "As of midday on Friday, August 5, twelve thousand tickets were sold per day for all events,” says Gomes, who also served as Artistic Director General of the four ceremonies. “After the opening, from Saturday, this number passed to one hundred thousand tickets. With 516 years of history, it was the first time that Brazil communicated with the whole world at the same time."

And indeed they were, and will certainly be remembered in the history of the Olympic Games.