For designers, Earth Day invokes environmental sustainability, the ever-evolving process of adapting designs to nature’s scarcity. With this in mind, we’ve rounded up some of our favorite projects that take sustainability in stride. If these inspire you, follow the links to see the complete case studies and learn more about their work! 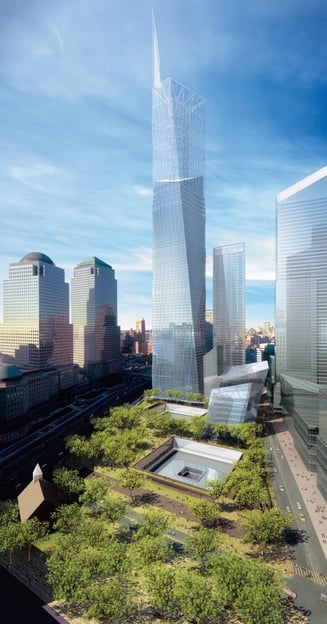 After the Twin Towers fell on 9/11, it was clear that the hallowed site in New York would memorialize this national tragedy, however daunting the design work may be.

Peter Walker, FASLA, was perfect for the task, having received over 70 design awards in regional, national, and international spheres. He and his firm, Peter Walker and Partners (PWP) Landscape Architecture, are considered one of the most successful landscape architectural firms in the world.

The project was poised around an idea from architect Michael Arad: that two fountain-lined voids — patterned with names of the fallen — would mark where the towers once stood.

Containers capture rainwater and carry it to two 568,000-liter tanks under the Memorial. “It’s the largest sustainable project in New York,” Walker said, “and maybe in the U.S. — I’m not aware of one of  this magnitude.”

Hikers in the Swiss Alps can find comfort in the newly redesigned Monte Rosa Hut, a unique and striking shelter nestled amongst the glaciers near Zermatt, Switzerland. The project celebrated the 150th anniversary of ETH Zürich as a collaboration between design students and Bearth & Deplazes Architekten AG. 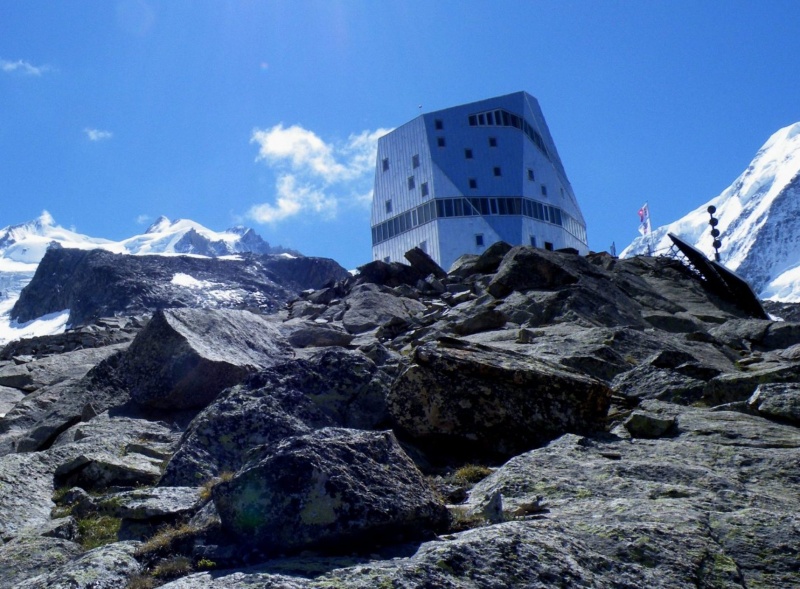 The Monte Rosa Hut against the backdrop of the Alps.
Image courtesy of Bearth & Deplazes Architekten AG.

The new Monte Rosa Hut not only provides a scenic resting space, but also serves as a research facility for ETH Zürich. The structure is 90 percent self-sufficient, built with locally-sourced, low-pollutant materials and boasting a sophisticated energy management system which calculates usage based on the number of guests and weather forecast.

One of many shelters throughout the Alps, the Monte Rosa Hut sets a new standard for addressing climate change by integrating sustainability into modern design.

The Parramatta City Centre in Sydney is the city’s second-largest Central Business District and the only one on the riverfront. McGregor Coxall, a firm in Sydney, Australia, had a vision to reorient the district toward the river, combining the built environment with the natural.

A rendering of the project "Where the Water Meets." Image courtesy of McGregor Coxall.

“Carbon is now traded as a commodity,” said Managing Director Adrian McGregor, “and it is unlocking a global market for new renewable energy technologies. Cities are in a rapid state of change that is as big as the Industrial Revolution. The software we use has to be intelligent in terms of our carbon footprint modeling.”

His statement comes as part of McGregor Coxall’s overall design strategy: that the built environment must respond to the needs of today and prepare for issues we’ll face in the future.

Newhall, California was once a backdrop for western filmography until the nearby suburbs of Los Angeles drew people away. A Newhall City Council recently launched revitalization efforts to transform the space into its once-glorious state: an attractive, pedestrian-oriented village. 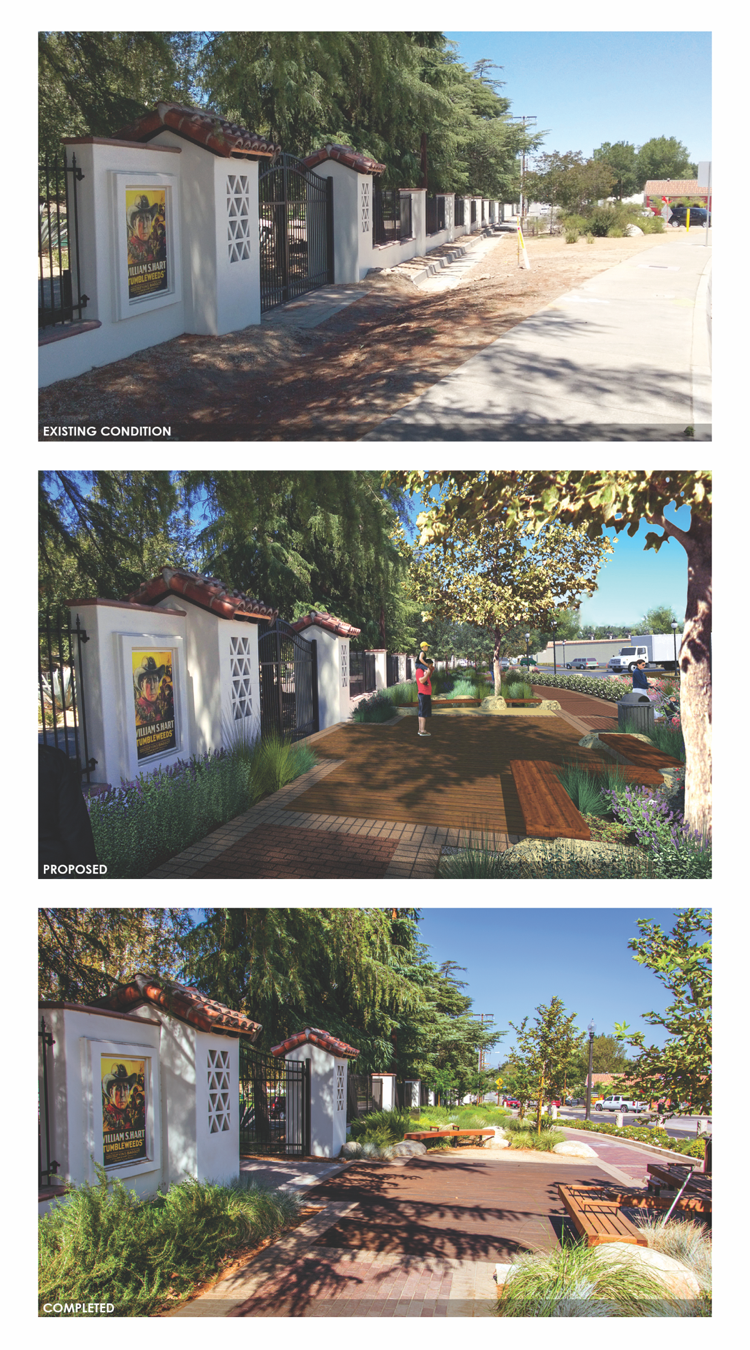 Before and after shots of Old Town Newhall. Image courtesy of Pacific Coast Land Design.

The task fell on Pacific Coast Land Design (PCLD), a firm from the region. Their  design screams sustainability: “We wanted to ensure that not a single drop of water is wasted,” said PCLD Principal Chris Roberts, who uses Vectorworks to carry out water budget calculations.

“We want to create a landscape that is both beautiful and can last for years to come,” he added, “no matter how the climate changes.”

The Kingsway Primary School in Gloucester, England takes sustainability and brings it to children aged four to eleven. 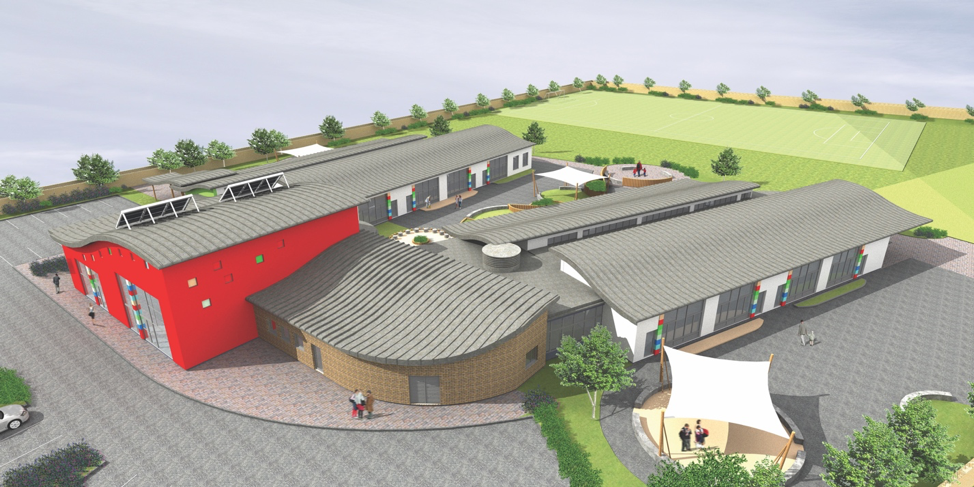 The school rests on the former site for the Royal Air Force (RAF), and the designers at Quattro Design Architects wanted to maintain that historical significance. Moreover, the Gloucester County Council wanted the project to be environmentally sustainable, so Quattro worked closely with the council to achieve that end — and it worked.

The school was awarded a BRE Environmental Assessment Method (BREEAM) rating — the leading environmental assessment method for buildings — of ‘very good’ due to its use of climate-controlled classrooms, solar-heated water, and strict eco-friendly maintenance.

Atsushi Kitagawara, an architect with a background in philosophy and painting, takes architectural design and infuses it with beautiful art.

He and his firm won multiple awards for their design work on the Nakamura Keith Haring Collection, a museum and spa complex that sits in a forest at the foot of Mt. Yatsugatake, an ancient Japanese volcano. The design considers its place in the forest, and the one-story building actually protects its surrounding trees. The building overlooks the Japanese South Alps and utilizes the hot springs native to the volcano as bathing pools, painting a charming portrait of nature.

“I always seek spaces and environments in which reason and emotion co-exist, like a poem,” Kitagawara said.

For more inspiring designs, check out our customer showcase.