ConnectCAD’s origin story begins in the early ‘90s when Conrad Preen was working as a systems designer in Greece. Preen, who later founded ConnectCAD, shared that “back then, it was quite popular for influential persons to have their own private television station.” He worked with Telmaco doing design-build jobs for these stations before being brought on by the Athens Olympics as the Senior Manager for the International Broadcast Center. During his time working with the Olympics, he became increasingly aware that there wasn’t a comprehensive software option for his work.

“Basically, it was the fact that I found myself in all these jobs doing an awful lot of repetitive work,” Preen explained. His work was much more complicated than he imagined it could be — because without a purpose-built software, much of his layout and documentation processes occurred tediously on paper.

Preen continued working with Telmaco alongside the Olympics. It was a good thing he did, because in 1993, a Telmaco coworker introduced him to Vectorworks’ earlier version, MiniCAD. He thought, That’s a lot better than pencil and paper. Through learning the program, Preen realized there were ways in which he could automate his process.

Inspired by the digital drawing tool, Preen started gathering ideas in 2000 for a software program of his own. By 2005, when he finished working with the Athens Olympics, he pulled all of his ideas together and released the first iteration of ConnectCAD under the name Neatworkz. 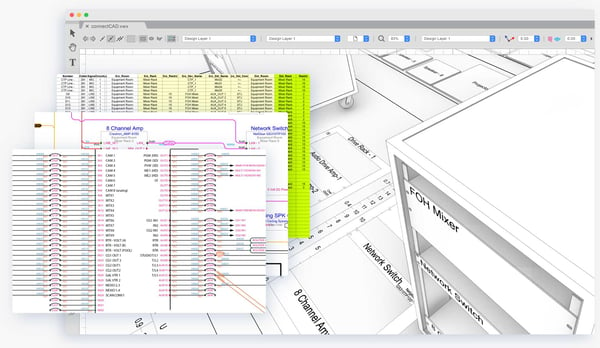 “It was quite a cheesy name, I’ll admit,” Preen confessed, adding that he had to spend a lot of time explaining to customers what the software is used for.

But Neatworkz wasn’t yet Preen’s primary focus. He was still working at TV stations in Greece, working for the Torino Olympics, and doing design work in Beijing. Neatworkz sales were increasing, though, and he was struggling with managing all the customer service and clerical tasks that come with running a business.

By 2011, Preen was tiring of explaining his software’s niche. That’s stupid, he thought. I should give it a decent name. He changed it to ConnectCAD, recalling feeling lucky that the name was even available. It was a perfect fit for summarizing the signal flow connections his product offered.

When he changed the name, he also committed to taking the product to a new level. He had a vision for installation technicians to work digitally instead of struggling through paperwork to find the proper documentation.

What Does the Acquisition Mean to the AV Industry?

Preen says there are plenty of benefits for those already using ConnectCAD, the first of which is guaranteeing the longevity of the product. ConnectCAD now has the full support of Vectorworks’ engineering and R&D teams, meaning it will live on for as long as there’s a need for systems design tools.

Along with the guarantee of longevity, expect to see usability improvements over ConnectCAD’s life as a permanent Vectorworks add-on.

If you’re looking to expand your reach into systems design, adding ConnectCAD onto your Spotlight or Designer license provides you even more capabilities for designing events and productions. The ability to diagram and document signal flows in communicable formats is certainly valuable.

Vectorworks CEO Dr. Biplab Sarkar did an interview with Live Design about the acquisition. Check it out here.

You can find more information on our webpage.

Collaboration among team members and project stakeholders has never been easier with this latest version of ConnectCAD. Here’s a list of what’s possible with ConnectCAD software:

Check out our guide that demonstrates a workflow with ConnectCAD and get inspired to start using it today.