Getting to Know Our CEO, Biplab Sarkar 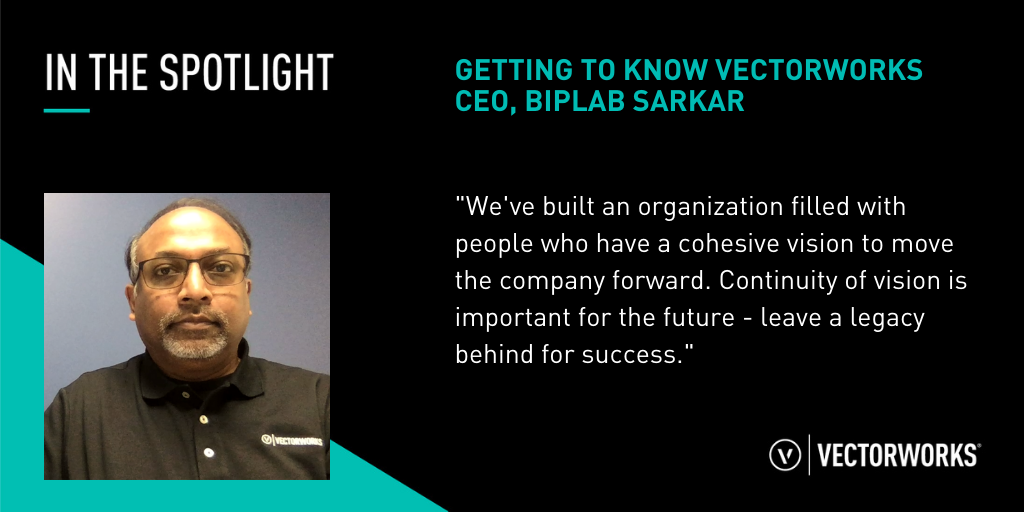 A little over a year ago, Vectorworks CEO, Biplab Sarkar could be found in the company’s Columbia office where employees would regularly stop into his glass-lined office to chat and ask questions. When the pandemic hit and Vectorworks transitioned to working virtually, the enjoyment Biplab had from casual and organic chats with employees was missed.

To fill that gap, the leadership team quickly adapted to delivering company updates through virtual meetings, but still needed a way to keep that personal interaction. The drive-thru events organized by the employee engagement team provided some socially distanced face time, fun games, and activities, but the opportunity for conversation still proved difficult for some.

A few weeks later Biplab began to join virtual team meetings and share his experience while answering employee questions. The Human Resources team was lucky to have Biplab join us recently for an open Q&A about Biplab’s background and time at Vectorworks. 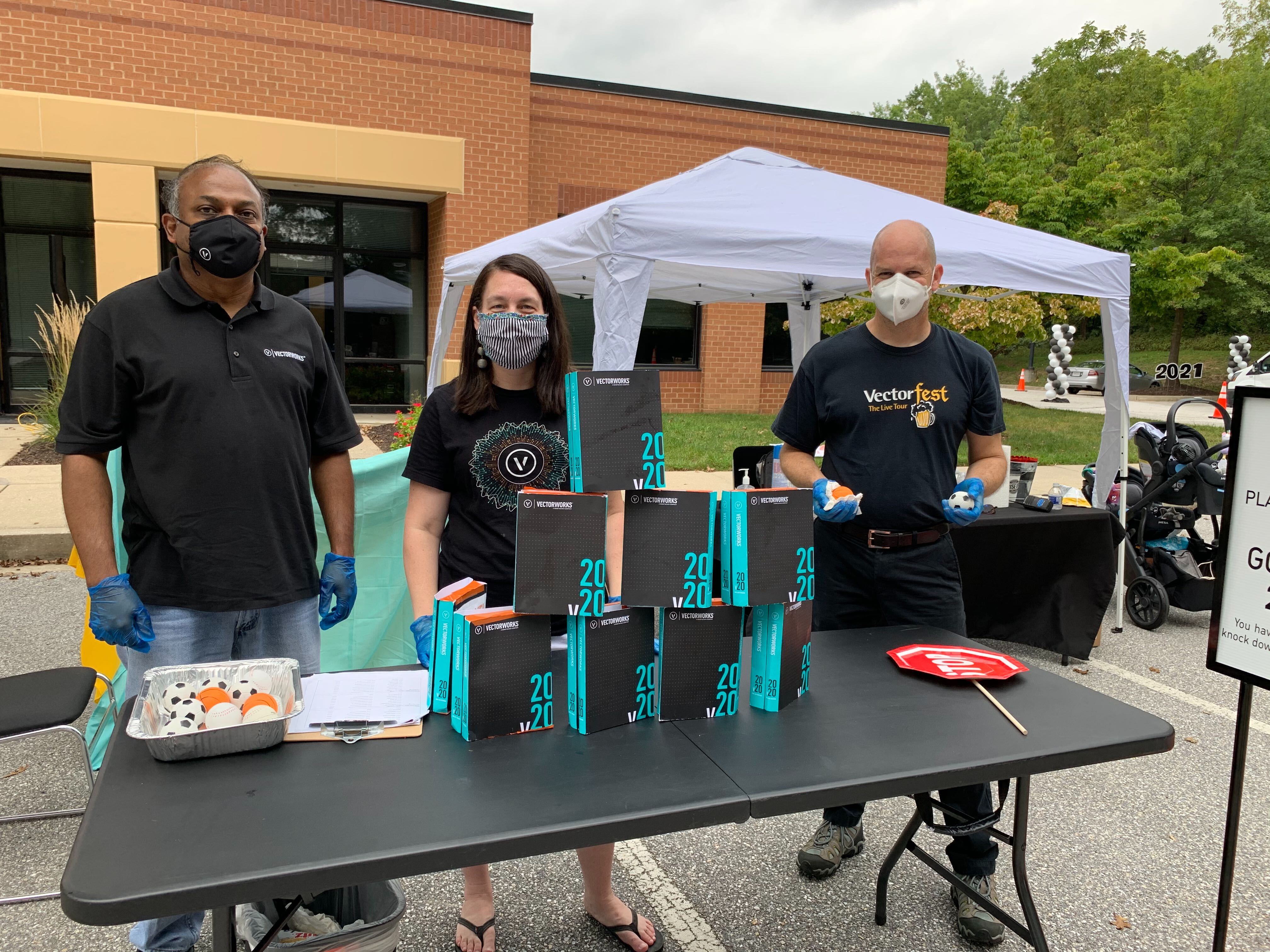 Q: Can you describe your path to Vectorworks?

A: “I came to the states in 1986 to pursue my master’s & Ph.D. at Ohio State University,” he replied, and laughed with the group as he went on “now don’t try to calculate my age from there!” Biplab went on to explain that he took his first job in Minnesota for a design software company owned by Volkswagon. He worked for a few different companies, averaging 3-4 years at each place before coming to Vectorworks. Biplab mentioned that one of the reasons he chose Vectorworks is because Maryland was a good place to settle down and start a family.

He chuckled at the memory of his first few days with Vectorworks. Because the company was growing so quickly and outgrowing its former workspace, he spent his time with Vectorworks at a desk in the hallway. He was quickly situated into a permanent location, but his first memories of Vectorworks have stayed with him.

He commented on the flexibility and opportunities for growth with Vectorworks, as he joined the managers of the geometry and rendering team, where he stayed for 7 years before becoming CTO. He then took over the role of CEO in 2016. Interestingly, Biplab originally reported to Paul, who is now the CIO, and they have enjoyed working together as peers to keep Vectorworks moving forward.

Q: What’s one thing that can make your day better?

A: Biplab laughed and said, “The executive team knows me well, but I can sometimes be a straight-shooter and that puts me in a situation where I have to say things that people don’t always want to hear.” He tends to form an inner circle around him to bounce ideas off of and take a break from the workday. He’s developed a good relationship with Steve Johnson and tries to catch up with him each afternoon. He said that having a group of close associates to talk with is a good way for him to come out of his focused work each day.

Outside of that, he also likes to listen to his favorite songs while he works. Music helped him through his Ph.D., and he has carried that hobby through his professional career. Biplab smiled as he reminisced on the 200-vinyl record collection that he received from another Vectorworks employee. “You can’t see them here behind me because of the background, but he was going to throw them away and I was happy to take them off his hands,” he said.

Q: Is that how you got into karaoke?

A: He laughed and said that he loves all kinds of songs and there have been groups of Vectorworks employees in the past who played music together. He’s enjoyed the talent pool and is proud of the many employees who have musical talents in the company. He used to attend concerts with coworkers at the local musical pavilion and recently attended a Santana concert. “There’s definitely a lot of hidden talent in the company.”

Q: Do you have a go-to song for karaoke?

A: Biplab smiled and said there are a number of songs he regularly uses, but his favorite is Queen’s Bohemian Rhapsody. “I also like Journey songs and a wide variety of other music,” he laughed. He said that he had to embrace karaoke since he always goes to dinner and karaoke when visiting the Japanese distributors. “Karaoke brings you out of your shyness and they take it very seriously over there,” he said and mentioned that he’s been to Japan 15-20 times since joining Vectorworks, so he has built up his repertoire of songs.

As he prepared to sign off, Biplab said that it was good to see everyone since we are not together in the office anymore and to make sure to have fun while working and make the most of the situation that we’re in. He mentioned that he has enjoyed using the new Zoom filters during meetings and said that it helps to lighten the mood when needed. 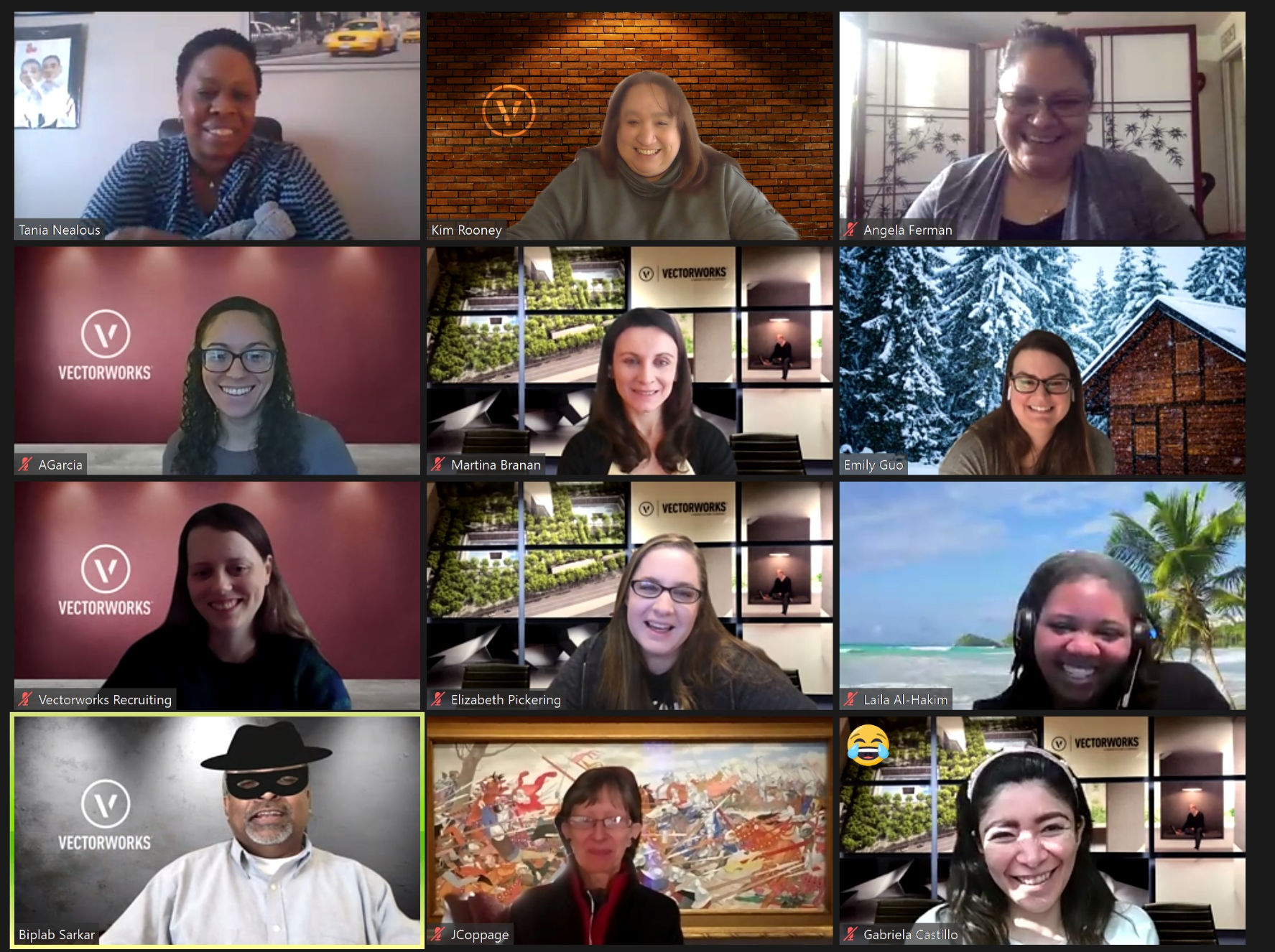 The team thanked Biplab for joining them and taking the time to share his stories.

“I thought the chat with Biplab was great, we should definitely do it again. CEO is such a daunting title, but he is so talkative and down-to-earth.  He has a wonderful ability to make you at ease.  I enjoyed hearing about his path to Vectorworks and admire anyone who leaves their native country and steps out into the unknown,” said Janet.

Tania agreed and added, “As a member of the executive team, I can appreciate how important it is to stay connected with your team. Especially in these challenging times, so when Biplab offered to join one of our team meetings giving us the opportunity to "ask him anything", I welcomed him.  I thought this was a great way for someone in his position to get to know the people of the company on a more personal level, which goes to show just how much Vectorworks values its employees.  It was also great to hear the great stories of his travel experiences.”

As the company continues to practice workplace safety and remote work, we look forward to many more opportunities for open communication across the Vectorworks team.