Using Vectorworks to Support My Journey in the Entertainment Industry

This blog was written by Andrew Chu, a young professional in the entertainment industry.

Chu first started working in the entertainment industry in 2015 when he was 17. In two years, he has worked in almost every theatre venue in Vancouver BC. After graduating from theatre school in 2017, he has since worked as a console programmer on several popular TV series such as The CW’s Arrow, Kung Fu, Disney’s The Mighty Ducks, Netflix’s Snowpiercer, and ABC’s Big Sky.

I have always been a believer in using technology to our advantage. The internet has allowed us to stay connected and streamline things in a way that wasn’t possible even 20 years ago. The ever-changing pace in technology means we need to stay constantly up to date, especially in the lighting department in the film industry.

I first started using Vectorworks Spotlight in theatre school back in 2015. Back then, we were shown how to simply draw things in scale so that the carpenters and electricians would know how to build and install our designs accurately. While learning how to use the software with a free student license, I discovered how powerful and advanced this software could be if I wanted to really get into it.

After I found a string of work as a console operator in the film industry, specifically working on network television series, I ended up buying a full Spotlight license in the spring of 2018 with a recent graduate discount, as well as a license of Lightwright 6 which integrates really well with Vectorworks. I made a decision that by investing in the software, I would strive to be the best in my field.

After two years of mastering the software, I was working on The Mighty Ducks in the fall of 2020. While on set, my rigging gaffer challenged me to 3D visualize the gala scene in Episode 106. It was easy to import the file into Vectorworks and render some drawings for him. It was also a very powerful planning tool since we only had one day to install the rig, due to venue restrictions. I pre-planned all the fixture and address numbers with the Lightwright 6 integration and printed out labels and patch sheets for the rest of the team, so everyone was on the same page. 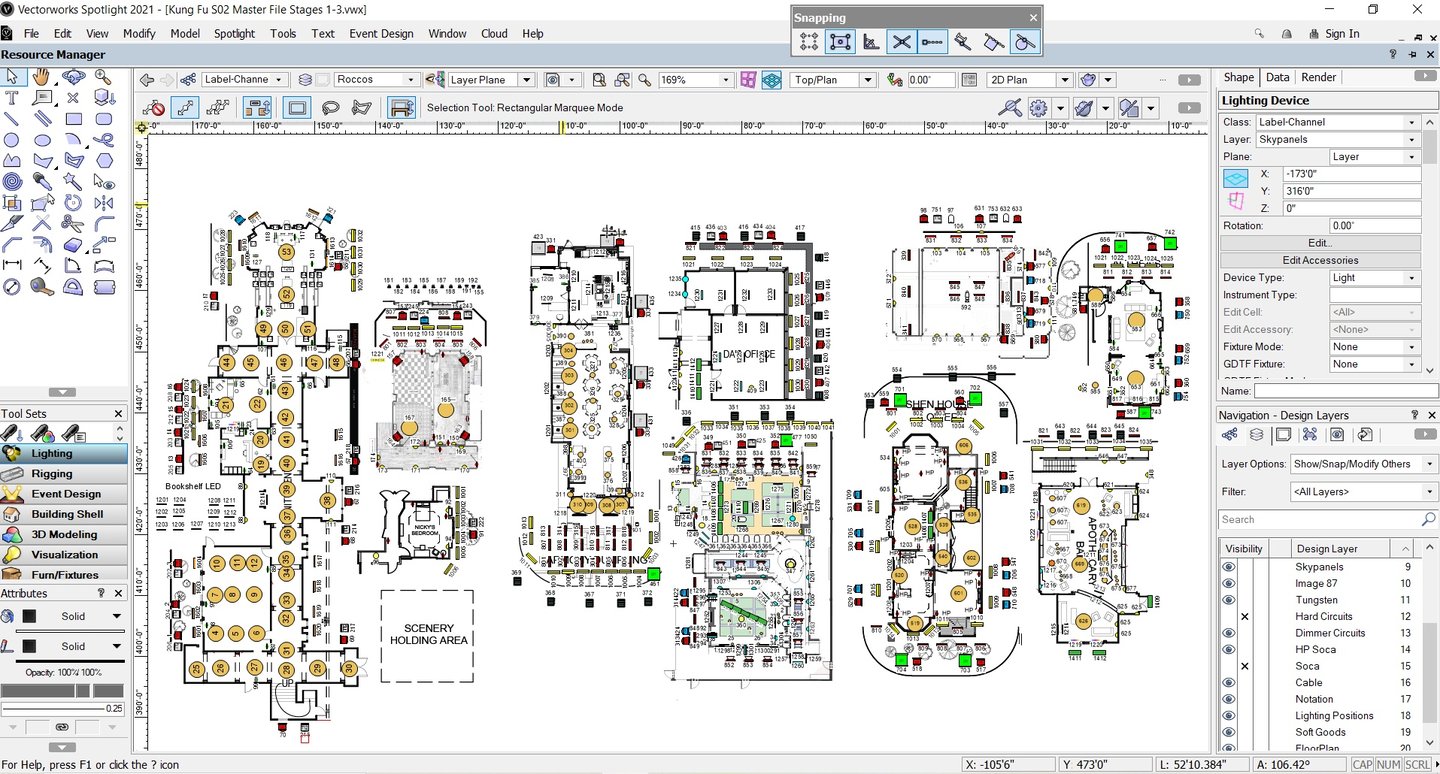 We weren’t given any Vectorworks or Lightwright 6 files from the previous lighting department, so everything had to be re-done from scratch. On my first day, I imported the plan view of the stages into Vectorworks and started to draw all the lighting fixtures. With the Lightwright 6 integration, I patched everything sequentially and instead of having Stage 3 end in universe 25, the stages didn’t have more than 6-8 universes each.

During the COVID-19 era, it’s important to have paperwork as organized as possible since the console operator could fall sick at any moment, and you could have a day-call come in to run the show with no knowledge of the sets. All the files related to the show, which includes EOS show files, Vectorworks files, Lightwright files, gaffer maps, patch sheets, and tech packs are automatically synced with the Google Drive desktop app. Whenever I make a change in the Kung Fu folder on my computer, the change gets live streamed into Google Drive to keep everyone informed.

Things change in the film industry very quickly. Whenever the gaffer and rigging gaffer want to make a change, I immediately make an update on the Vectorworks file, export the Viewport gaffer map, which gets livestreamed into the Google Drive folder. Since I have Lightwright synced with Vectorworks, whenever I make a change on my Vectorworks file — such as adding a light — Lightwright automatically updates as well. I make the appropriate changes on Lightwright such as updating the fixture and address number, which then syncs with Vectorworks, and then I export the patch sheet as a PDF which also gets livestreamed into Google Drive. I can also quickly generate Avery labels for the team to put onto the lights. 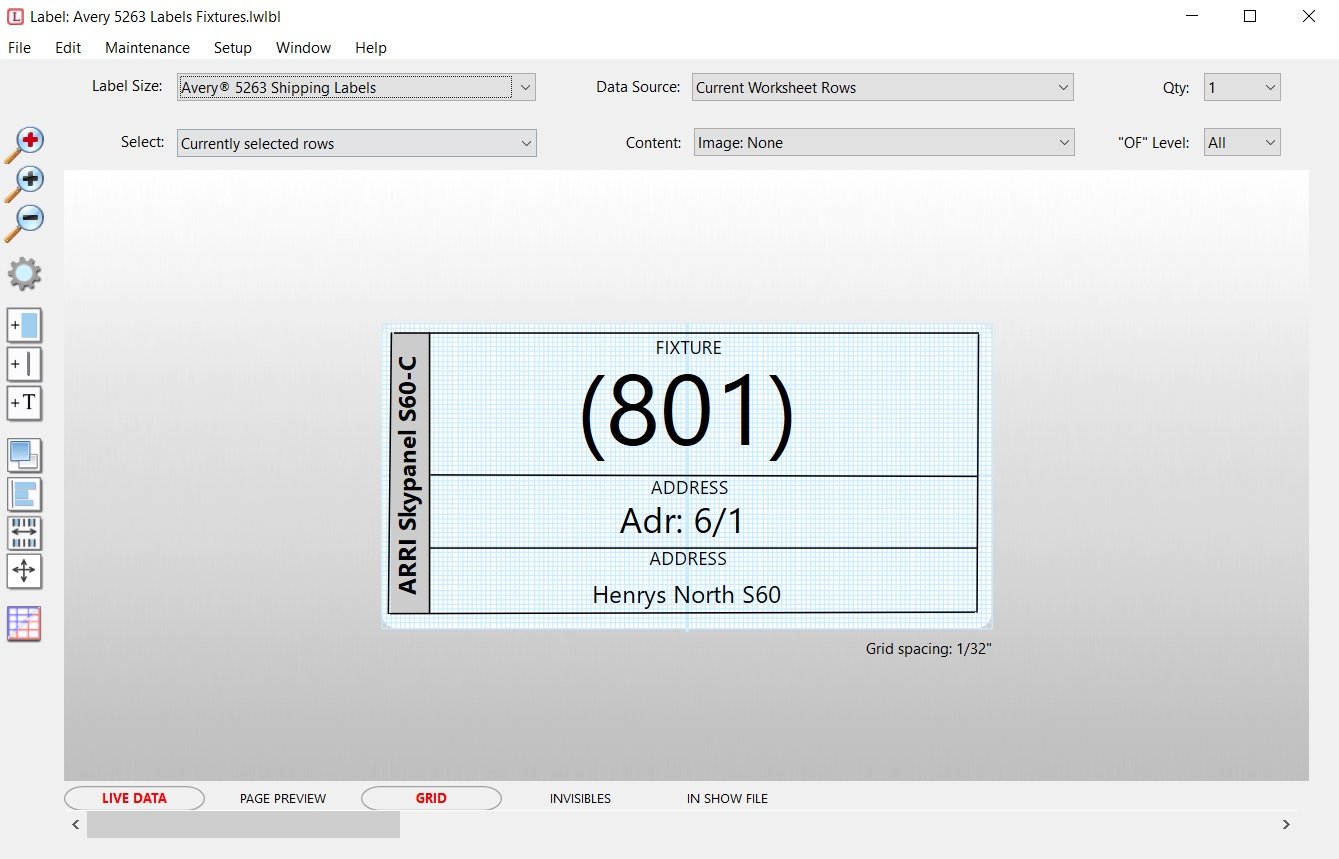 My hope is that I will upgrade to a rigging best boy position in the next 5 years. And then, upgrade to a rigging gaffer position by the time I turn 40. Eventually, I’d like to learn how to use Vectorworks as a proposal tool for budgeting purposes as a rigging gaffer. If I could draw all the lights, cable, and dimming to scale in Vectorworks, I could automatically generate an item list and then punch those numbers into an Excel spreadsheet for an accurate budget proposal. A few of the top rigging gaffers for some of the biggest shows in Vancouver are already doing this, and it's my goal that I will one day be able to get there as well and be at the top of my field.

If, like Chu, you also aim to be at the top of your field, check out Vectorworks University. Click the button below and begin your learning.