After a week of hands-on training, a handful of Rental and Staging Network (RSN) members can see their Spotlight visions clearly now, and their rendering pain is gone! In just five short days, they took their knowledge of our software to the next level with the help of Vectorworks Trainer Michael Groves and Entertainment Product Specialist Jim Woodward.

We had the opportunity to interview Michael Wright, a member of the RSN and CEO of Michael Andrews Audio-Visual Services, who shared excellent feedback.

Wright’s team at Michael Andrews Audio-Visual Services has almost fully converted over to Vectorworks. They made the move from Vivien and WYSIWYG about four years ago. “We feel that Vectorworks is not just for preproduction on an event, but it is a solid tool in delivering our vision to the client and selling the show,” said Wright. “It is an industry standard and a great sales tool!”

In their shared email network, RSN members discussed which event drawing software they were using. Wright found that 90 percent of the people who replied were Vectorworks users. “So, when we saw that there were so many of our members using your software we knew we had something there,” said Wright. “We had a shared tool, we had a shared need. It was something we wanted to develop.” 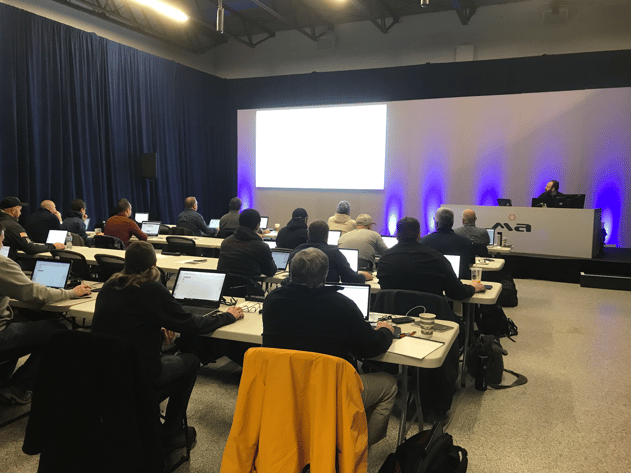 The RSN members during training with Michael Groves.

As a group, they wanted to be able to develop better drawings, produce them more quickly and with more detail. It was important to them to walk away from the training with the ability to create a rendering that could easily depict how their client’s event would go. “We learned how to quickly get a usable drawing put together, and then be able to go back and fancy it up later,” said Wright.

The first two days of the training were spent bringing the attendees up to speed on the basics of Vectorworks Spotlight. At first, some of the participants were not interested in advanced topics, since they were convinced they would only be working in 2D on overall project layouts. But by day three, everyone was working comfortably in 3D.

“Your preproduction tool is invaluable to us because you can give your client an image of what their show is going to be long before the event, have those discussions, make those changes on paper, agree to something and then roll it out to the field and the implementation,” said Wright. “There's not a lot of dialogue because it's in the drawing. And the rendering even shows the colors and the textures.”

They agreed that they now have the ability to share their visions clearly with their clients, while saving time and money in the long run. “We feel that Spotlight is a great tool for making sure we understand our client’s needs and echoing that back to them.” 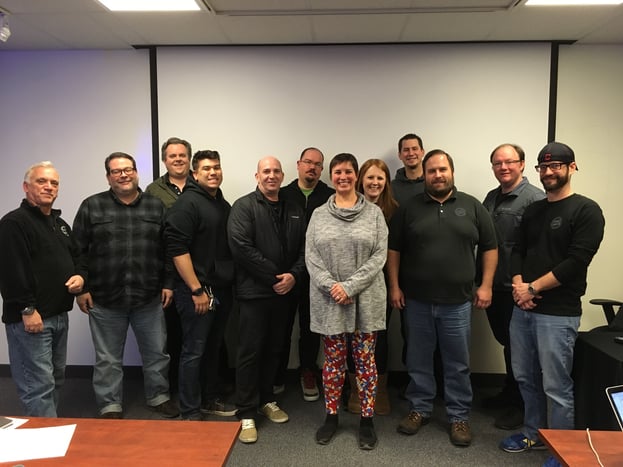 A group shot of the RSN members and Jim Woodward after training.

“As a summary of the five days we were there, I believe we were able to achieve all goals, and have everyone walk away with the skills they needed for their different individual applications,” says Woodward.

“This was a group effort,” said Wright. “RSN is a great organization and I think everyone really benefitted from this training. We’re looking forward to the next series of classes that Vectorworks offers.”