How to Create a Virtual Club That Brings Skillsets, Software, and People Together

The experience of walking into a nightclub, immersed in a neon wash of pumping music, buzzing conversation, and pulsating lights, might seem impossible to translate into the virtual world of the COVID-19 pandemic. It might, until you experience the fully virtual club Jazz Hutsby and Oli Gorman at Lockdown Visual Systems(LVS) have brought to life.

Opening a (Virtual) Club in the Middle of Lock-down 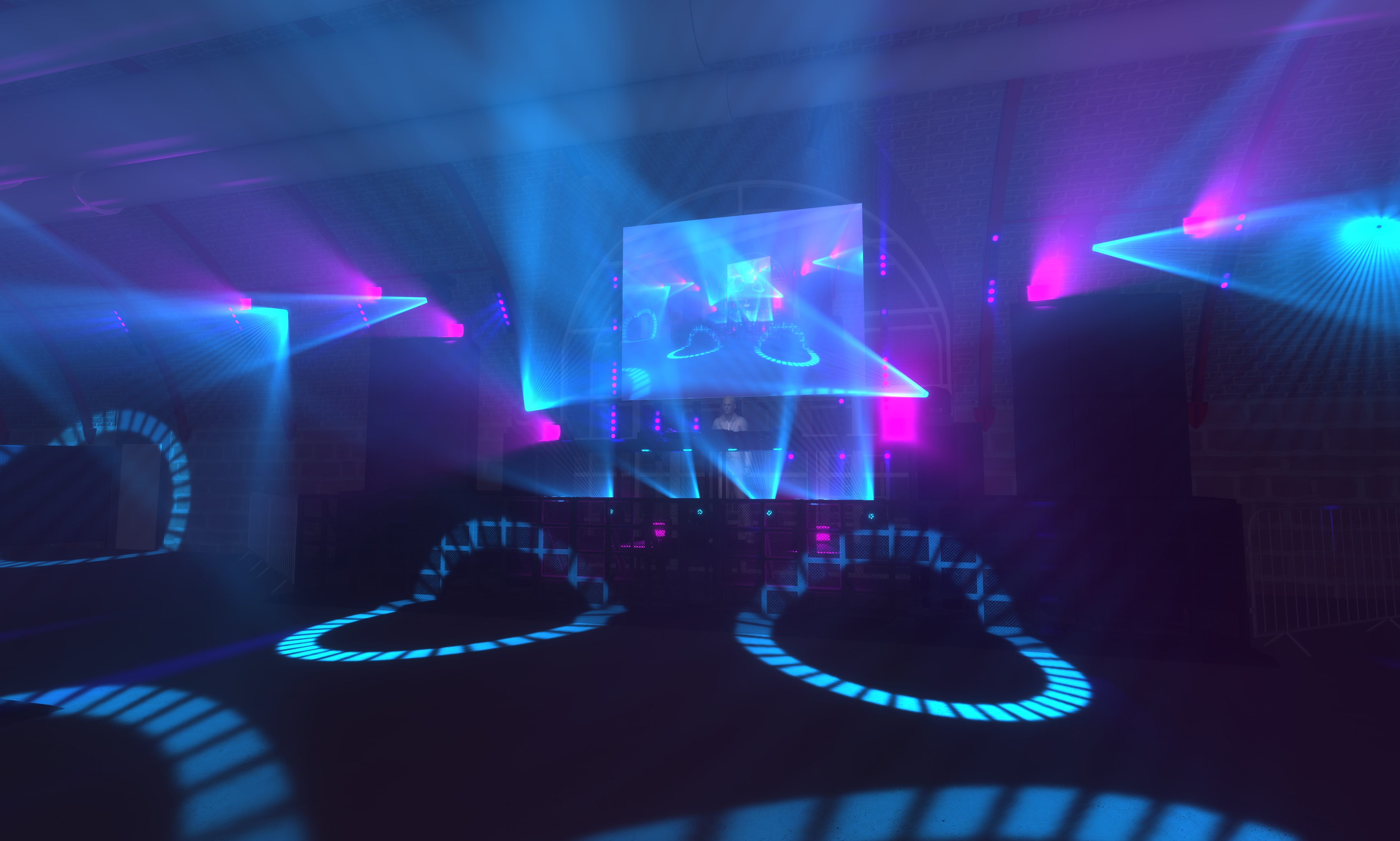 The main stage of the VClub lit up for a show. Photo from Jazz Hutsby.

The VClub has all the live lighting, visuals, and DJs you’d expect from a real night-out, except it’s an entirely 3D-built experience that virtual partiers can access anywhere through the web. Modeled after a classic Glasgow nightclub that closed down in 2015, VClub resurrects the cherished venue to host DJ live-streams, innovating a way to bring clubbers together while we all stay apart.

This project was the idea of Jazz Hutsby, a lighting designer and technician. Prior to the lock-down, Hutsby had long-standing ties to the club scene in Glasgow and Scotland as whole, connections that would eventually lead him to a concept for innovation.

“When it all hit, I started seeing them streaming on Facebook or Twitter. And it was just the guys in their bedrooms,” Hutsby said. “I’ve been using some lighting visualizers for a while, so I was like it’d be cool if you could build a club, and have the DJs and the music.”

Once Hutsby and the team had committed to bringing this dream of a virtual club to life, they set out developing creative solutions to the design problems an experience like this entails.

Resurrecting The Arches with Vectorworks

The virtual entrance to The Arches. Photo from Jazz Hutsby.

In building their venue, Hutsby decided to revive a Glasgow favorite.

“There's a very famous club that shut down about five or six years ago. It's called The Arches, and it's where I sort of cut my teeth,” Hutsby said. “We basically recreated it circa eight, 10 years ago. It was the same sort of club environment, the set-up, lights, and equipment.”

With their location in mind, the LVS team began building the virtual club using their secret weapon – Vectorworks Spotlight.

“Vectorworks was just the key for that,” Hutsby said.

A side view of the virtual club model. Photo from Jazz Hutsby.

With semi-accurate floor plans, pictures, and memories to guide the process, Hutsby leapt from using Vectorworks for lighting design to exploring its full suite of easy-to-master modeling tools. Even the more difficult sections of the building, like its tunneled ceiling with countless arches, became intuitive with Vectorworks’ adaptable toolset.

And, once the space was created, Hutsby went to work bringing it to life, adding all the décor that makes this virtual club The Arches. 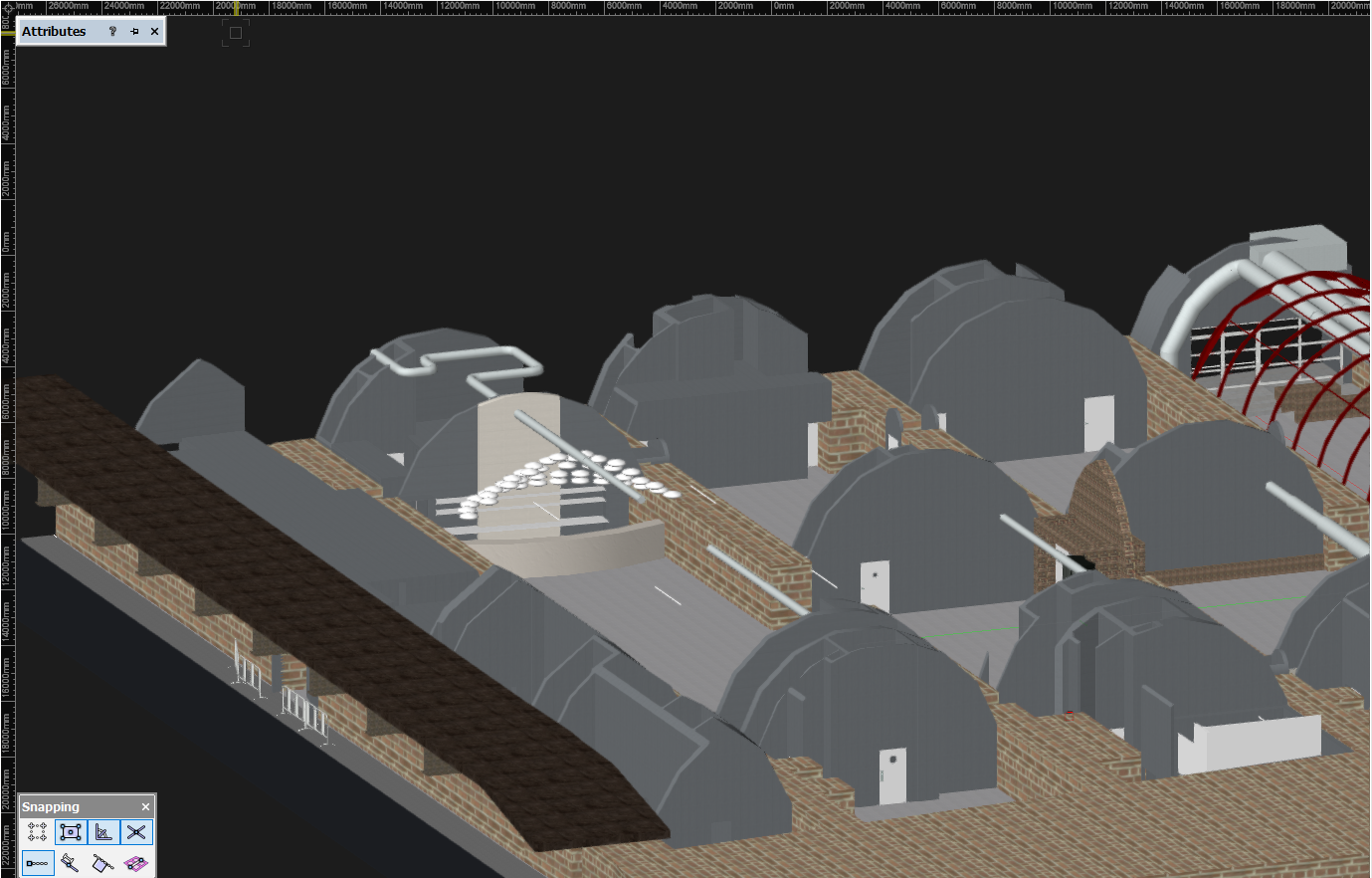 Bringing The Arches’ iconic main bar to life required keen attention to detail, including dropping in “flying saucers” as pictured here, which used to hang from the club’s ceiling. Photo from Jazz Hutsby.

“So, we spent a lot of time getting that right and adapting that. And then it was just a case of using all the entertainment tools, just to stick in all of the barrier tools, staging tools.” Hutsby said. “Once we got into that, Vectorworks Spotlight is really, really easy to use.”

Connecting Across Software to Complete the Experience

With the venue built, decorated, and ready to export into their visualizer, Hutsby and Gorman had to address another challenge – bringing it all together.

“The big trick was trying to make everything sync up,” Hutsby said. “All of my lighting, all of the camera moves, it’s all live.” 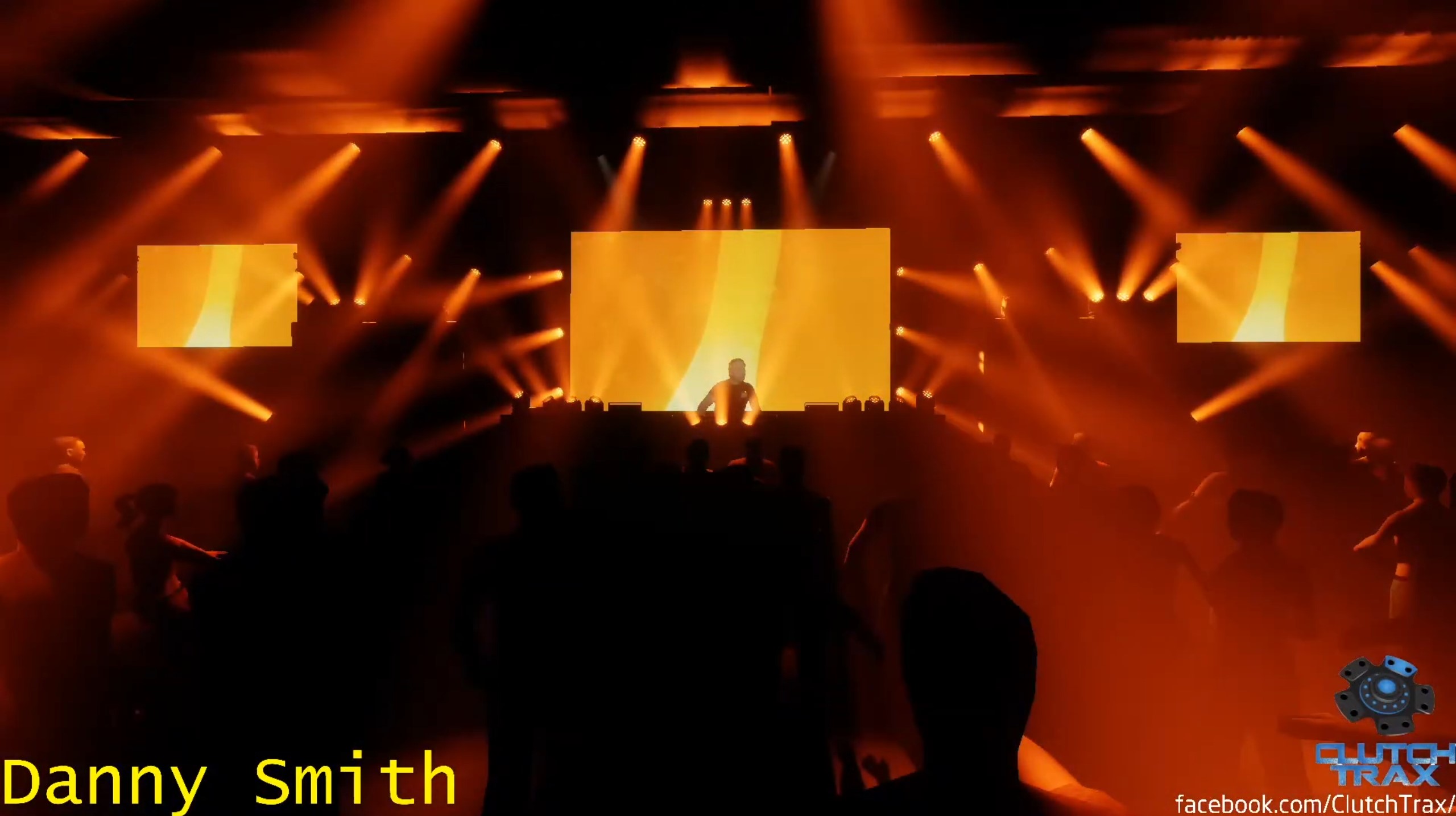 DJ Danny Smith plays a set at the virtual club on August 30, 2020. Photo from Jazz Hutsby.

Currently, the VClub runs through four machines, for the visualizer, lighting, streaming, and media respectfully.

The L8 visualizer Hutsby uses is supported by its own Vectorworks plugin for exporting projects, like his massive virtual club, into the other software. Besides just being able to export the right kind of files, Vectorworks Spotlight also made it easy for Hutsby to export the club in bits and pieces that made the process more manageable.

“So you have to kind of split up, I'll take the walls and the ceiling and export just that,” Hutsby said. “But Vectorworks makes that easy, because you just turn those classes off and those layers off. And then it exports. The class and layer system made it really easy to just export what we needed to export.”

For Hutsby, Vectorworks’ adaptability and connectedness were critical to bringing this project to life. While a lot of the tools he used to make the VClub happen were new to him at the time, Hutsby sees them as foundational for a future of entertainment that bridges the gap between virtual and in-person experiences.

“I think there’s scope for Hybrid events,” Hutsby said. “Because we're using Vectorworks to build our base designs, so the transition into the digital world is a lot smaller. You don't need to look at it too much like you're doubling all of that work. You need to do those plans anyway. You need to draw the venue, you need to do all the cabinets and stuff anyway, so they can run hand in hand.”

At the moment, Hutsby is staying focused on VClub and the virtual community they’re building. Some of the LVS team’s plans for the future include adding multiplayer to the club, allowing partygoers to fully interact with each other. To bring that dream to life, he mentioned using Unreal Engine, a project that will certainly benefit from the recently announced connection in the Vectorworks Partner Network.

“There’s massive crossover now into games development,” Hutsby said. “A whole new world that I otherwise wouldn’t have stepped into.”

Wherever that new world goes, Vectorworks will continue supporting innovative creators like Hutsby and Lockdown Visual Systems in their pursuit of beautifully designed and thoughtfully connected experiences.