No More 'Grey' Skies for this Successful Scholarship Award Winner

When you review Morgan Lindsey Price’s résumé, you immediately notice her extensive scenic design experience in theater and fast-growing art direction experience in TV and film, including the new Grey’s Anatomy spinoff. A detail you may not notice, however, is that Price was once a theater and economics double major pursuing acting — until she discovered Vectorworks software.

“I picked economics because I’m good with numbers and my parents said I couldn’t just major in theater,” says Price.

Post-graduation, Price tried acting professionally for two years, but then took a step back and reassessed her career options. It was during this time that she decided to take courses in design, which led to an introduction to Vectorworks.

“I registered for an Intro to Scenic Design class and the professor told me to learn Vectorworks,” says Price. “I signed up for a crash course in the winter semester. It was a two-week course, six hours a day.” 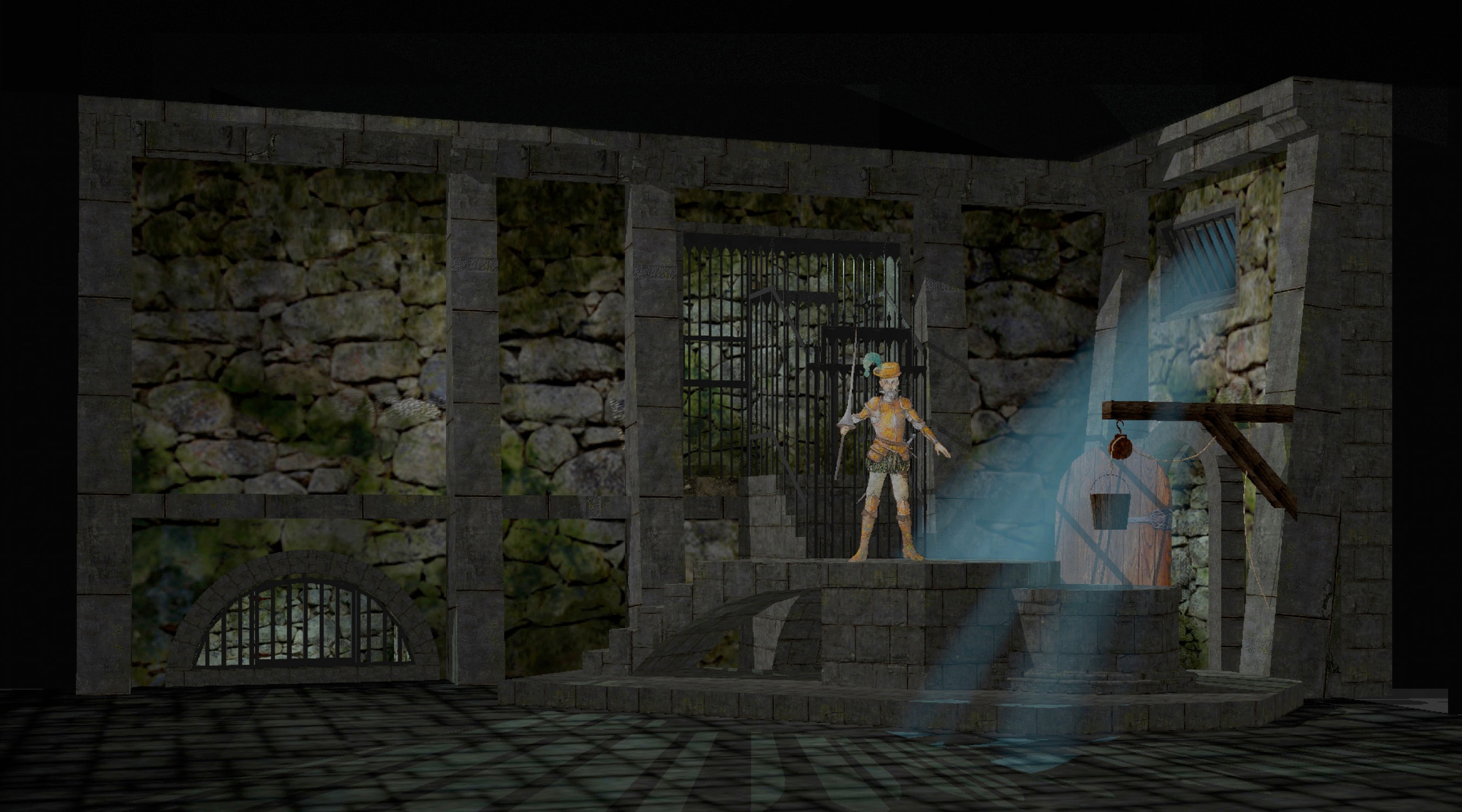 In addition to her coursework, Price also liked to explore and experiment with the software in her spare time — something she highly recommends to students and designers interested in learning Vectorworks.

“While learning the program formally is great, spend time messing around it, too — just for fun try to figure out how to better utilize the abilities it has,” says Price. “Figure out the best way things work for you.”

Her extra work and due diligence paid off. Price was soon admitted to the Master of Fine Arts program in Scenic Design at the University of California, Irvine, where she made professional connections in the field.

“Lonnie Alcaraz (a Vectorworks beta tester) is a teacher there,” says Price. “I properly learned Vectorworks at UCI — I learned rendered features.” In her last two years of graduate school, she worked as Alcaraz’s teaching assistant. It was also during this time that she worked with Romanian director Mihai Maniutiu on The Electra Project.

“I was really excited to work with someone who doesn’t have a western background because I knew it would be very abstract and unique work,” says Price. “I had a $1,000 budget and designed a six-foot diameter pendulum that moves throughout the play up until someone when it stops on a dime.” 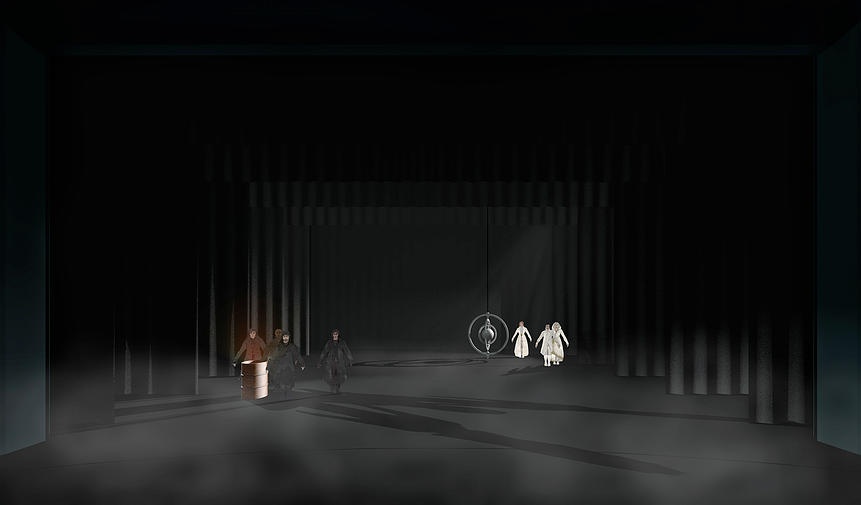 It was this design for The Electra Project that Price decided to submit to the 2015 Vectorworks Design Scholarship award cycle with lighting designer Martha Carter.

“It wasn’t an elaborate design, but it was so abstract and poetic,” says Price. “Martha and I were excited about developing something that created a voice for women in theater.”

The design won. According to Price, this honor would not have been possible without several Vectorworks capabilities.

“I did 3D modeling for The Electra Project and created textures with Renderworks, which were helpful,” says Price. “The great thing about Vectorworks is that because I was communicating with someone in Romania I had to send emails, so being able to send a digital rendering over email and change it quickly was so helpful — it was fantastic.” 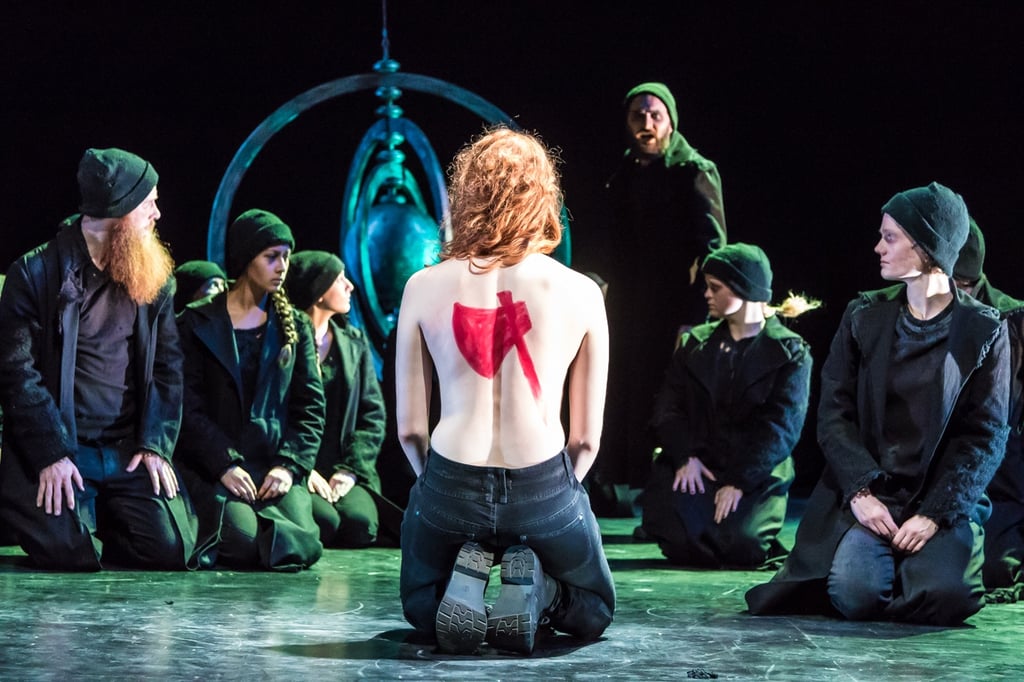 As Price built up her design portfolio, Vectorworks software continued to play a key role in her transition from theater to TV and film.

“I worked for Dave Edwards in his D Before E firm, working on event design and unscripted shows, as well as the TV show World of Dance,” says Price. “I also worked on Lexus and Toyota car shows. This was the first time I was using auto hybrid objects. It sped up my process and changed 2D into 3D for me.”

Her speed and attention to detail, as well as her Vectorworks proficiency, has led to her most recent project: assistant art director for the upcoming, untitled Grey’s Anatomy spinoff.

When asked to reflect on her growth leading to this position, Price remains humble.

“I felt unsure of my ability to hit the ground running after graduation,” she says. “I am fortunate that I was so well trained in Vectorworks; I know what I am doing, which is a valuable skill. That has been huge.”

Competition is Scare When it Comes to Quality

In this transition period, Price noticed fellow designers using SketchUp. Price, however, continues to choose Vectorworks for her projects.

“SketchUp is not as precise as Vectorworks,” says Price. “When I’m doing a quick rendering, I want it to be accurate, so I’d rather just start in Vectorworks. I often work with people who use SketchUp and they think it’s faster, but I am just as fast in Vectorworks. To me, the rendering capabilities in SketchUp are clunky and slightly cartoonish. Vectorworks has the ability to refine the lighting, giving you gorgeous renderings.”

This ability to control the look and feel of renderings is a benefit of Vectorworks that helps Price communicate with clients.

“I often use white models that don’t look as polished, textured, and finished; you can give a less-polished version initially, but then a very classy look for the final version to share with clients,” says Price. “For example, we’ll do renderings for the Grey’s Anatomy spinoff showing different options for solving problems. It is easier to have a conversation about it when it looks like a sketch rather than a fully done rendering.”