Pop-up Architecture Makes a Statement, One Bucket at a Time

“Pop-Up” architecture allows architects to get creative with inventive materials. 5468796 Architecture, a Winnipeg-based architecture firm, is a team of progressive design enthusiasts that jumped at the opportunity to create a temporary structure with local design team Factor Eficiencia for Mexico City’s MEXTRÓPOLI City Architecture Festival in March, 2017. 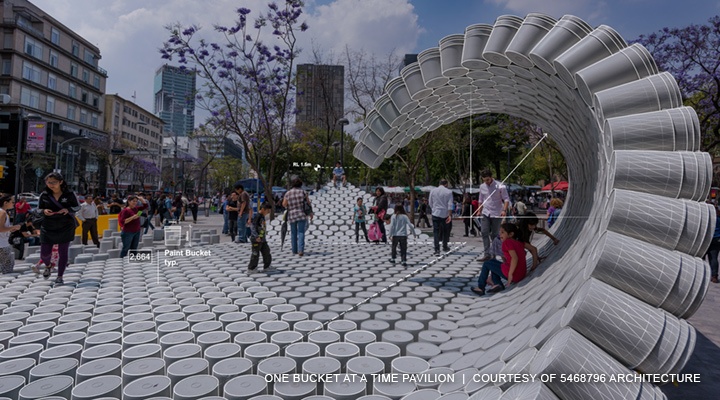 Mexico City’s parking shortage has led to traffic jams and unhappy commuters. The situation has also fueled the efforts of local entrepreneurs, referred to as “viene viene,” who bribe police officers and use painters’ buckets to save parking spots on the streets. The viene viene then charge a fee to drivers who want to park in one of the saved spots.

The international, collaborative design team’s project “One Bucket at a Time” was inspired by the tension of this situation. The firms used painters’ buckets to craft an interactive pavilion where children and adults alike could explore, play, and sit. The buckets were fastened together using a grid of ropes and the pliable structure could be manipulated — rolled, folded, and pulled together — like a giant carpet. The 1,076-square-foot structure was designed with Studio NYL structural engineers and was installed for the four-day festival before being dismantled and absorbed back into the city. The nature of its malleable form allowed the installation to be redesigned for a new context in September of 2017 for Winnipeg, Canada as part of the Winnipeg Design Festival and Culture Days Manitoba.

"For both the Winnipeg and Mexico City installations of 'One Bucket at a Time,' the Vectorworks program allowed our designers to quickly test a variety of orientations, forms, folds and curves to best suit the specifics of each site. The ability to explore section conditions created engaging opportunities in the final design, while also providing an efficient platform to produce drawings for both permitting and publication." —5468796 Architecture

"One Bucket at a Time" is featured in the launch of Vectorworks 2019. Learn more about the exceptional quality and performance in the newest release of our software today.