The team at PWP Landscape Architecture, a 35-year-old landscape architecture firm led by Peter Walker, began their recent work in Sydney in 2009 when they were selected to lead the public domain strategy for Barangaroo, a globally significant, 22-hectare waterfront renewal project along Sydney Harbor. In 2015, Barangaroo Reserve was the first phase in the three-district master plan to open, with Barangaroo South and Central to follow. The Reserve project re-creates “Millers Point” headland in its original location by transforming a concrete container port into a six-hectare naturalistic park with over 75,000 plantings native to the Sydney region. 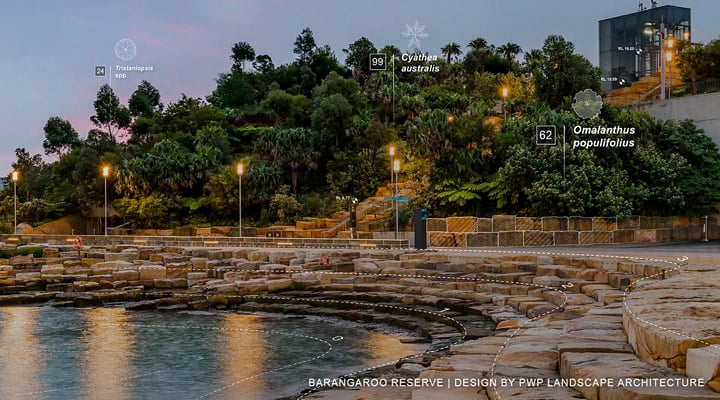 David Walker, FASLA, in collaboration with his father, Peter Walker, FASLA, led PWP’s design at Barangaroo and they served as Partners-in-Charge for the project. They used Vectorworks every step of the way, and will continue to use it until the completion of all three districts.

“We are working with the government on this project, so we have to find the balance in Vectorworks in which we provide a technical persuasion along with a drawing that politicians can look at to see what the finished product is going to look like,” said David. “These factors don’t usually go together; I would call it a design development/schematic design hybrid. Luckily, this is what Vectorworks is very good at.”

Through this project, PWP Landscape Architecture has developed a tradition of design practice that responds to, as well as influences, its environment. The PWP team works diligently to balance constructed and natural systems and is passionate about finding beauty in both.

Guided by geomorphologic studies conducted using Vectorworks, as well as historical maps and early paintings, PWP’s design of the headland included a foreshore constructed from 10,000 massive sandstone blocks excavated directly from the site. Along the headland’s foreshore, pedestrian and bicycle pathways are separated by a low, one-meter-wide sandstone wall, the symbolic marking of the original pre-colonial shoreline known as the “1836 Wall.”

Barangaroo Reserve transforms a huge expanse of empty concrete into humane, usable space with ecological goals always in sight. All plantings are native, not just to Australia, but specifically to the Sydney area. And Barangaroo has been selected as one of 17 precincts worldwide to participate in the Clinton Climate Initiative Development Program, with the goal of reducing on-site CO2 emissions to zero.

The project has also been recognized as a C40 Climate Positive Development, which commits a constructed development to be carbon neutral, water positive, and zero waste. The materials removed from the site, such as the kilometer of concrete caissons and asphalt that formed the concrete container port, were ground up and used for base layers and soil to create the headland. Using the site-harvested sandstone for the foreshore edge eliminated the energy and exhaust of thousands of truck-loads through the city.

The other two districts, Barangaroo South and Central, are scheduled to be completed in the next several years. Barangaroo South is an extension of the Sydney CBD. It’s a perfect contrast to the Reserve: with more than 50 bars and restaurants, it takes on the social outlet role at Barangaroo. It also features a new ferry terminal and pedestrian walkway to allow visitors easy access to and from the city. Barangaroo Central is the last part of Barangaroo to be designed, and will be the last to be built. Another major connection between Millers Point and the harbor, it will provide entertainment space for major public events and festivals.

“Being able to break out levels of detail at different stages of development, whether conceptual or schematic, and using Vectorworks to manage the different workflows has been, and will continue to be, the most useful capability during the course of this project,” said David.

Barangaroo Reserve has become a “must see” for locals and visitors to Sydney and has received more than 7,000,000 visitors since its opening in 2015. The project has already won multiple awards, including the Banksia Foundation Sustainability in Design/Build Award, Australian Institute of Landscape Architects President’s Award, President’s Award of the Australian Engineering Excellence Award Sydney, World Architecture News Award, Architizer Award, and the American Architecture Prize. The project is expected to be fully completed by 2024, which will coincide with the Barangaroo Sydney Metro opening. Once completed, Barangaroo will accommodate more than 23,000 workers and residents and attract thousands of visitors each day.