“You’re going to make me cry. Give me a second; this is really important to me.”

Ami Hanna stammered ever-so-slightly and soldiered through as her eyes welled up with emotion. A stage designer for the Salt Lake City Pride event each year, Hanna cites the community and her own sexuality as reasons why the event means so much to her.

“I’m not gay, I’m not straight, I’m somewhere in between,” she said. “This is the one Stageline show a year that I do, and I do it because this community means so much to me. I love the people I work with.”

Hanna’s passion was palpable, even through the screen of a Zoom call.

She also mentioned that her daughter even participates every year. These personal connections have driven Hanna to great stage design at #PrideSLC.

Taking Over the #PrideSLC Stage Design

Hanna, a production designer, technical director, and LSO for Luma Box Designs, took over the Stageline production for Salt Lake City Pride in 2015. She inherited the job from a colleague, Nick "Murph" Murphy, who went on to start Murphy's Production Services.

Murph supplied Hanna with a detailed draft of the event’s Stageline 250 — a drawing he did in Vectorworks. This model served as the foundational starting point for each of Hanna’s designs for the following years.

Hanna said that the #PrideSLC event always contains a video wall. “In 2015, video walls weren’t as standard in the industry as they are now. So, we were using a 24 mill. outdoor blow-through wall that used Linsn processors,” said Hanna.

Video wall technology advanced over time, but Hanna decided it shouldn’t be the sole subject of her attention. This is because most of the festival and its performances took place during the daylight, barring a couple of hours on Saturday night.

Instead, the details of each design were centered around one thing: the headlining act.

“I would modify things to accentuate whoever the headlining act was,” said Hanna. “There was always a video wall, always a front light, and I would make sure that SLC Pride gave me all the banners on time.” 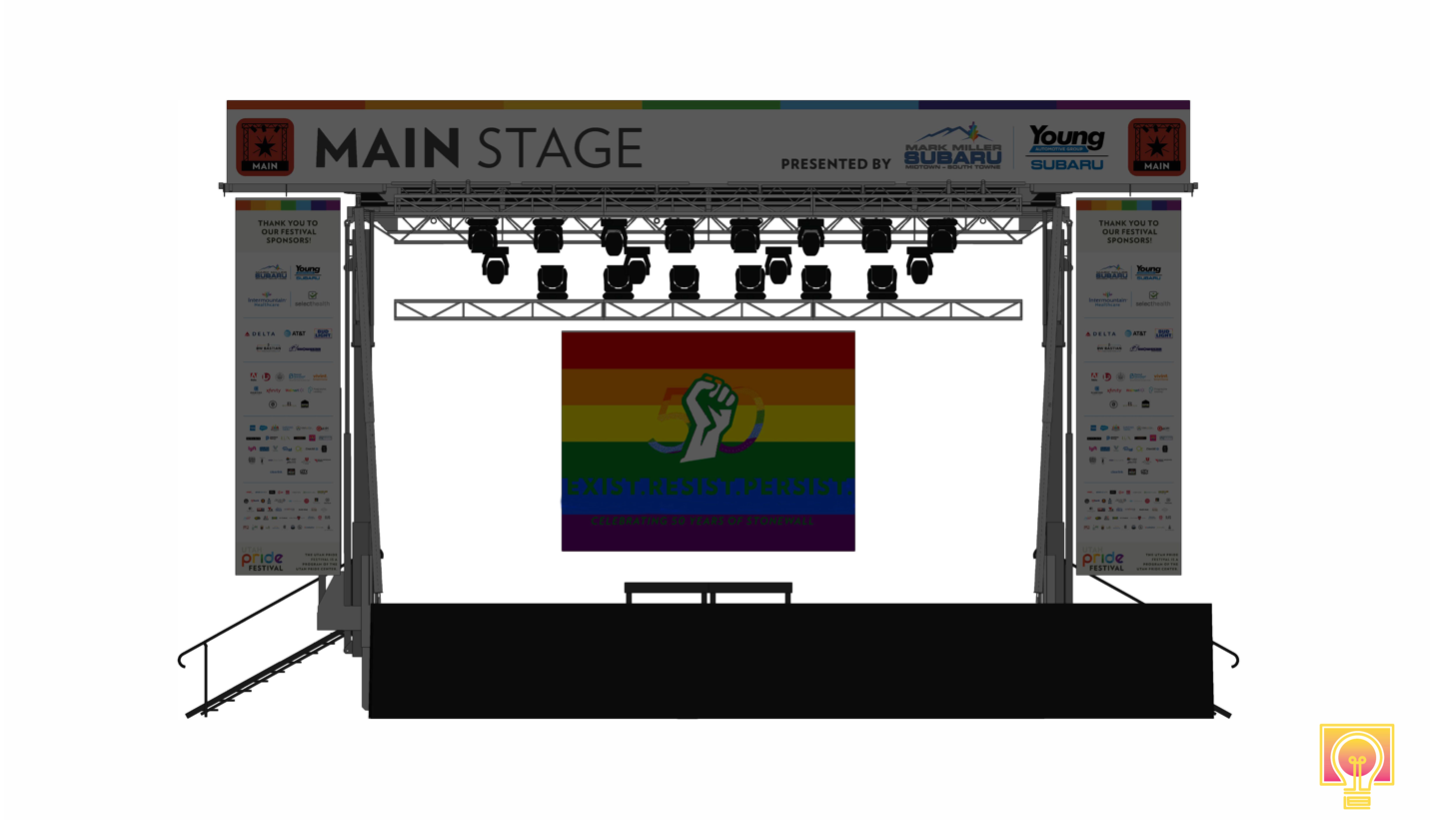 “The year before that,” Hanna remembered, “I had a DJ. So, I brought lasers that year. I made it more like a dance club.”

Madame Gandhi headlined SLC Pride in 2018, and Hanna had some help from her daughter to design a stage more focused on video content.

Hanna’s daughter, Isabelle, who was 10 at the time, said, “Mom, Pride is my favorite event of the year because everyone is treated equally. It doesn’t matter what gender you are, or who you love. Everyone treats everyone with kindness.”

“Isabelle really understands the magic of production,” Hanna said. “When she told me that, it made me feel like the work I did at Pride has a bigger impact that can reach a more people than the other shows I do. The most exciting thing about Pride to me right now is how many young people are showing up and participating.”

During the pandemic and the abrupt stop of live shows, Hanna took stock in the kind of design work she was doing. After this evaluation, the designer decided to focus on her laser work.

“I’m ecstatic to see that the 2022 version of Vision has laser integration. My laser designer friends and I have been talking about this for years.”

Hanna believes that such an integration will lead to better communication amongst designers who “live and die by Vectorworks.”