Student Spotlight: How to Push Boundaries When You See a Need

If you had told Christian A. Kurka five years ago that he would be working toward planning and designing more accessible theater spaces with the help of Vectorworks Spotlight, he probably wouldn’t have believed you. But once he was introduced to the production side of theater, he did not waste any time. 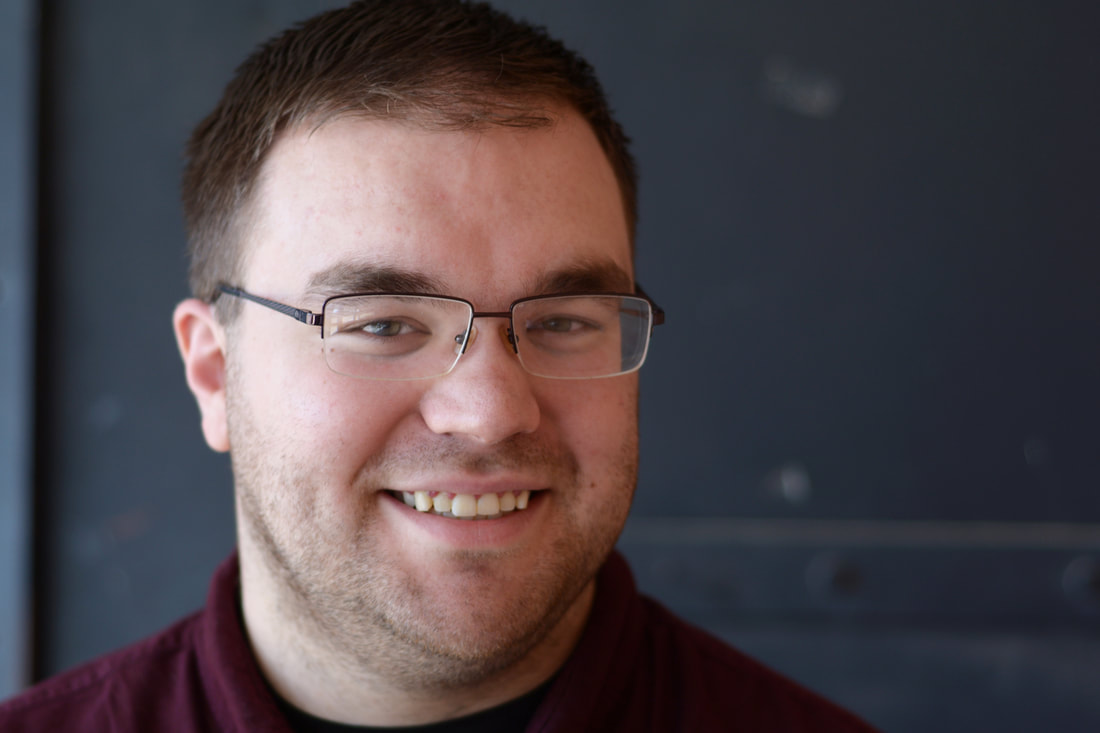 Kurka recently completed his studies in Theater at Southern Illinois University Carbondale, where he was involved in a number of projects for the theater department. From there, he began networking with top professionals in the theater design industry, which eventually landed him a gig as Props Designer/Master for Arrow Rock Lyceum Theatre’s 2018 summer season.

He credits his career trajectory to life experiences: his stepfather, who was an RV designer and CAD software user; his partner, an actor who introduced Kurka to the production side of theater after many years of being an actor himself. But it was Kurka’s own tenacity and diligent work that ultimately built up his impressive résumé within a relatively short timeframe. One instance involved scheduling an interview at the Southeastern Theatre Conference (SETC) that landed him the Lyceum Theatre job. By observing and working alongside the scenic and lighting designers there, Kurka received the hands-on experience that he needed. But it was also through this work experience that he realized the efficiency and potential of Vectorworks for theater design. 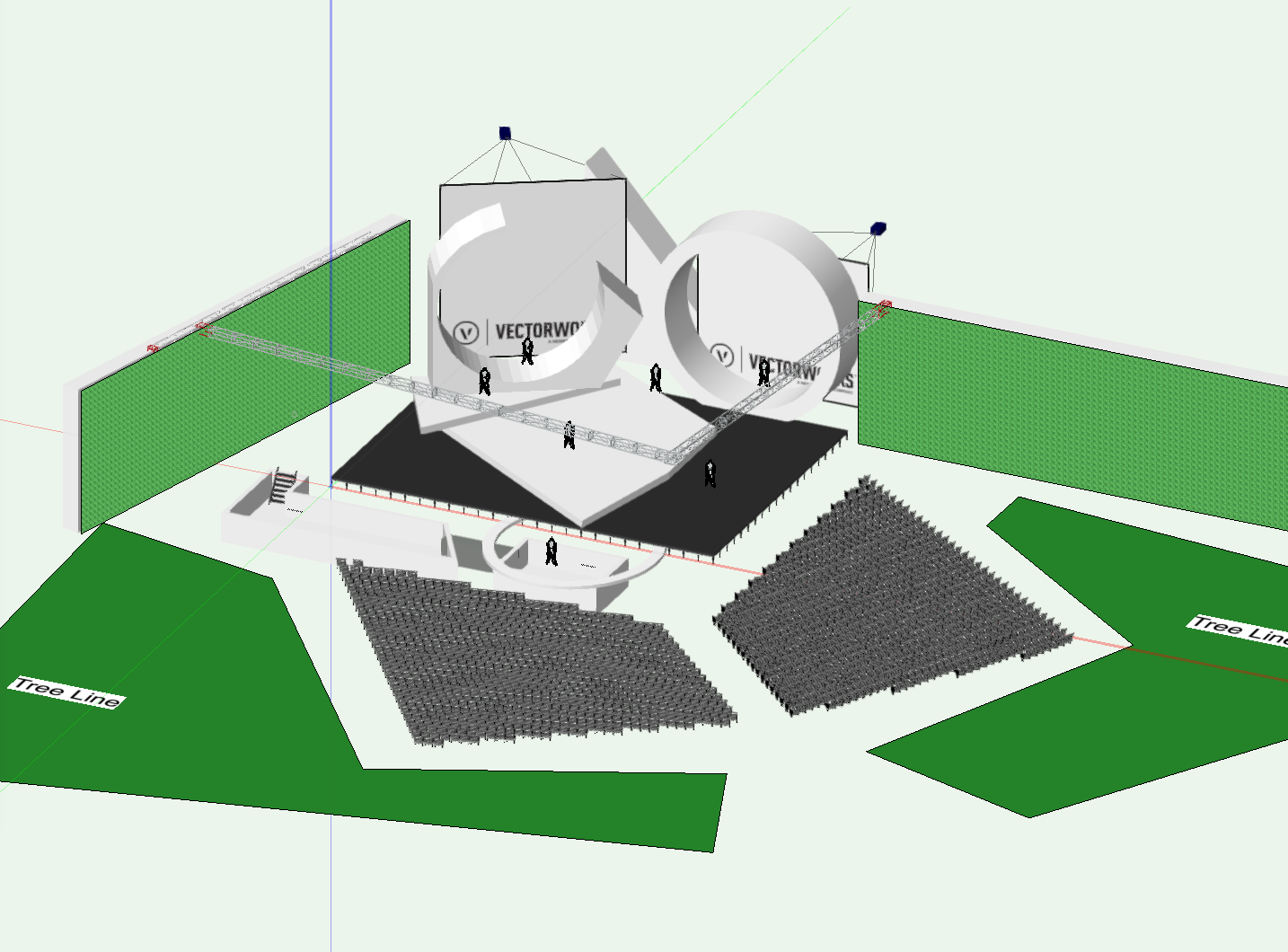 He continued, pointing out how designing with Vectorworks differed from his experiences using AutoCAD, as both programs were taught in his drafting classes at Southern Illinois University.

“AutoCAD just takes longer,” said Kurka. “It’s incredibly difficult to learn their commands; you have to type them in. With Vectorworks, the commands are easily clickable. It’s a bigger learning curve to figure out where things are sitting in AutoCAD. Vectorworks is a lot easier to learn and grasp.”

Learning the software quickly is just what Kurka needs to move toward his ultimate goal: being the Artistic Director for Accessibility for a theater space. With a minor in American Sign Language (ASL), along with his personal experiences as a hard-of-hearing person, he hopes to one day transcribe musicals into ASL for all audiences. In the meantime, he infuses this perspective into his design work. For example, his design of Boy Gets Girl for Southern Illinois University was completely ADA compliant — from providing ramps that allow wheelchairs to sit on the floor and move around the set comfortably, to offering listening devices and interpreters to Deaf audience members. 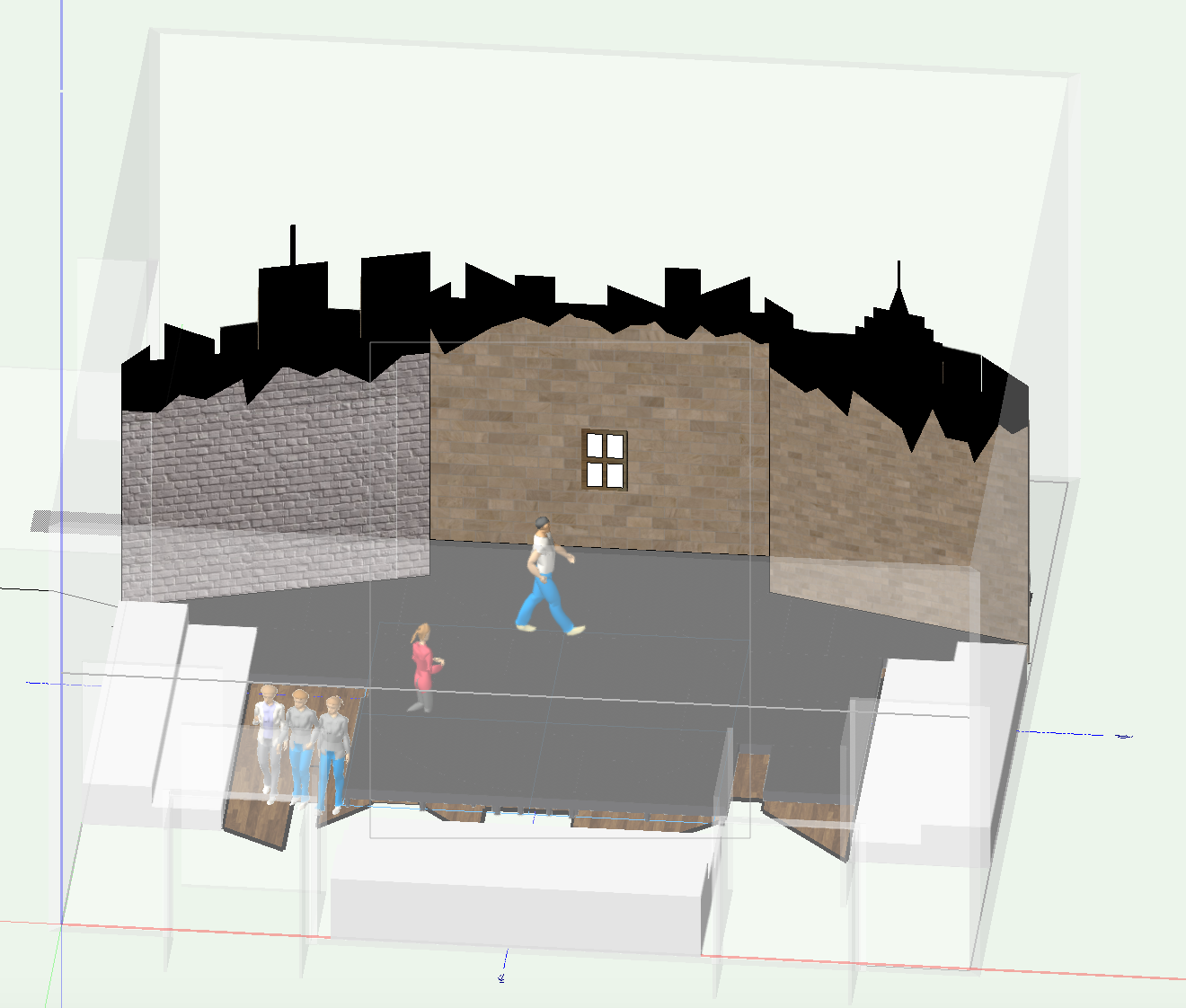 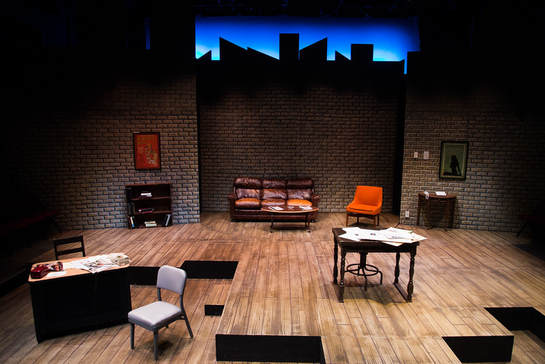 Kurka also appreciates the ability to completely work in 3D within Vectorworks. In another show at the University titled 800 Days of Solitude: A Conjuring, he used the Reshape tool to create abstract shapes that hung from the ceiling with illuminated lights and projections (that he also designed). 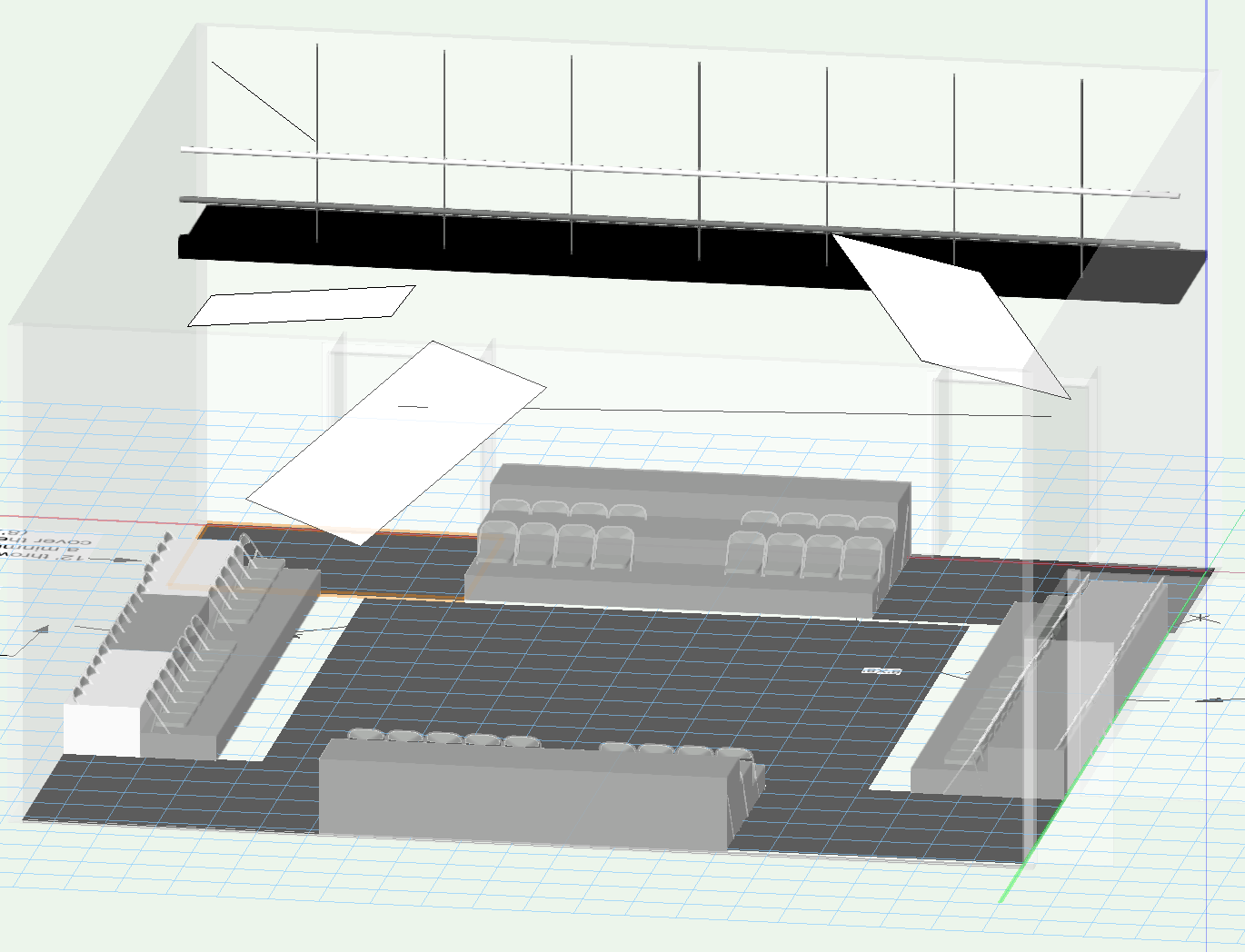 “Just being able to use full shapes and colors has been useful,” said Kurka. “Also, the different perspectives (located in the Projection commands) have been great; just being able to change how the design looks on stage has saved so much time in production meetings.” 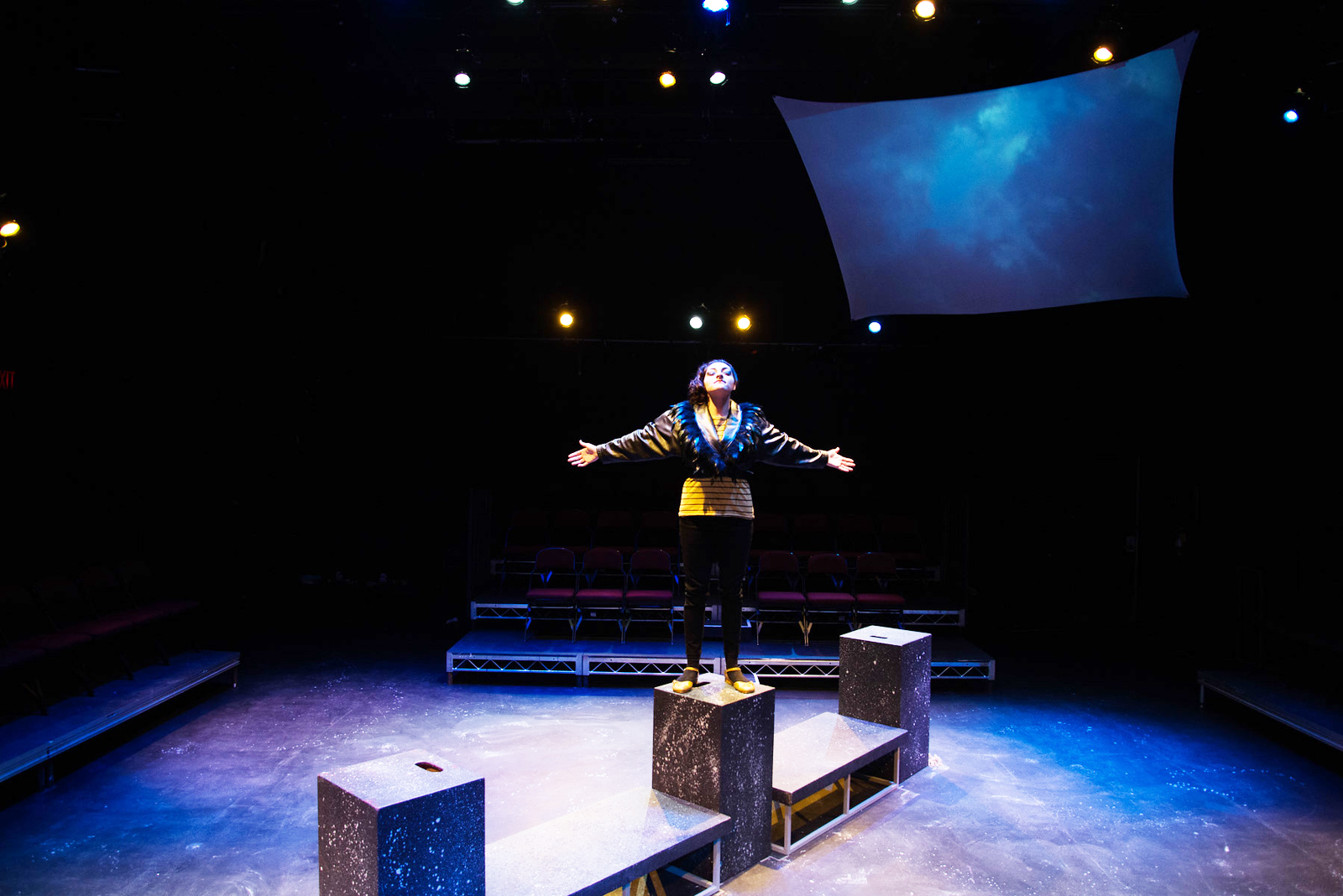 800 Days of Solitude: A Conjuring. Image courtesy of Carrington Spires.

He cited other specific resources that have helped him pick up tricks within the software.

“The Skateboard Park tutorial has helped me the most with 3D shapes,” said Kurka. “Also, talking to people at the theater has been helpful.”

His biggest resource, however, seems a little less structured.

“Just playing around in the software has helped me learn how to build things more easily,” said Kurka. “If you play around with a specific fun project in mind, it can help you learn the software a little easier, which may be one of the most important differences between Vectorworks and AutoCAD.”

With accessibility at the forefront of his designs, he hasn’t been afraid to think outside the box.

“Don’t limit yourself with your designs,” Kurka recommends. “Always push boundaries with your work.”

Interested to see how Vectorworks Spotlight can work for you?