The countdown is on! We’re kicking off our launch season with the Teaser Tuesday blog series. Each Tuesday until the #Vectorworks2021 release, we’ll share a behind-the-scenes look at upcoming enhancements.

Here’s the ticket for today: improvements to our 3D modeling capabilities will cut your mouse clicks in half.

Your designs are an important first step in the production process, so your software shouldn’t be slowing you down. That’s why we’ve focused in on pain points in the 3D modeling process, simplifying the Push/Pull operations to save you time.

Eleven different tools have brand new modes as an extension of our Push/Pull feature. We’ve also extended instant Push/Pull operations to 3D polygons, NURBS curves, and Line objects. These will make for a huge improvement with solids modeling. Now when you draw on the face of an extrude or other solid object, you can select a face to extrude or perform a modifying operation like Add or Subtract Solids. 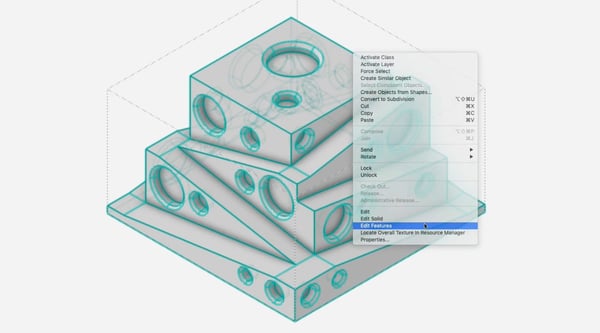 But it doesn’t stop there. No more double-clicking on solid modeled objects to edit their history. Instead, simply right click to directly edit the modifiers. Once you’ve finished, easily return to your project since we’ve also eliminated the need to click multiple times to exit the modeling history.

“These changes really make modeling more like a flow of creation instead of having to plan where you wanted to end up.”

Stay focused on your model, rapidly test design options, and make last minute changes on the fly to enhance your overall productivity.

Join the conversation in the Vectorworks Forum, where you’ll find a video from our software engineering team on modeling enhancements in Vectorworks 2021.