The Production Behind the 91st Academy Awards

“No matter what kind of design you’re doing, there’s always some kind of story to be told,” said Amanda Stephens of David Korins Design, the group responsible for the set design on hit productions like Hamilton on Broadway and the 91st Academy Awards.

This being the first time working on the production design team for the Academy Awards, Stephens remembers feeling particularly excited about designing the 2019 awards show, noting that it would be somewhat of a departure from shows in years past.

With this year’s Oscars right around the corner, it’s a good time to look back to see what kind of work goes into such an extravagant event.

Stephens is intimately familiar with designing for awards shows. She recalls a short turnaround time for the 2019 Oscars — the David Korins team was briefed in October of 2018 for a show happening in February of 2019, a fast deadline considering a typical slowing-down over the holiday season.

“We wanted to have all our visuals in place by Thanksgiving, about four weeks after we received the project,” she said. “We wanted to create six to 10 distinct visuals, then be able to combine them for 16 to 20 entire concepts. It was like a big jigsaw puzzle with an unknown result.” 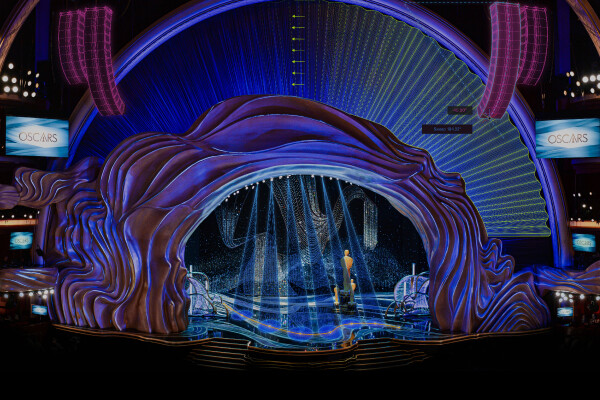 The 91st Academy Awards | Courtesy of Korins and Drew Dockser

An unknown result is what makes designing the Oscars so unique — the Korins team had to put together a set without knowing who was nominated, who was presenting, or who was performing. The story that Stephens is always looking to tell in her design work was thus difficult to pinpoint. “It’s this really strange thing where you’re almost working in a void,” she said.

This is where keywords come into play. The Korins team were provided with a handful of words that captured the target mood of the event — some of these words were “warm,” “soft,” and “inclusive,” and Stephens recalls a producer wanting the show to “feel like a hug.” In the image above, one can see that these words inspired blue and purple dulcet tones, which evoke feelings of warmth and homeliness.

The swaying design in the downstage arch offers a sense of motion to an otherwise stationary stage, which plays well with the kinetic and detailed lighting. To achieve the “inclusive” brief, the team looked beyond the stage and incorporated set pieces into the audience. Part of the goal here was to break up the event’s status quo, Stephens said, and to make this event feel new compared to years past.

One might wonder how it’s possible to develop this kind of intricacy in such a short time.

Since the Oscars happen at the same place each year, the venue comes with basic 2D CAD files and simple 3D models, Stephens said. These files were imported and referenced into Vectorworks Spotlight, where the Korins team did the majority of their work.

Telling Stories by Visualizing in 3D

“Looking at things in 3D really helps us get a sense of the environment,” Stephens said. “There are certain parts of the show that never would’ve happened had we not been able to visualize things in 3D. One of David’s Korins' big things is making sure equipment isn’t visible in our designs. As an example, for the Oscars, we were able to see where the first electric interacted with the show portal. The first 3D visualization showed the lighting fixtures sticking out beyond the show portal and it looked like a row of gapped teeth. Not exactly what we were going for. We were able to make adjustments to scenery and masking upstage of the first electric to mask the lights and make them less visible. I don’t think we would have understood the extent of the issue if not for 3D.”

The Korins team used a unique 3D workflow in Vectorworks for this project. They placed a 2D drawing on the 3D axis as a way to visualize camera angles. They did a lot of tracing over linework from renderings to get their drawings. This allowed them to scale the drawings properly and then see the results in 3D.

The 91st Academy Awards | Courtesy of Korins and Drew Dockser

One of the benefits of working in 3D comes when seeking sign-off from clients. For the Oscars, there needed to be a lot of back and forth in order to get the show looking its best. Being able to view a rendering in 3D allowed the Oscars team to see the event as if they were there, without the need for a deep understanding of technical drawings.

“I’d really like to stress the usefulness of using 3D in Vectorworks, even at a very basic level,” Stephens said. “It can teach you so much about scale.”

Not only that, but due to the client’s request to see the show from a variety of different angles, 3D visualizations were crucial.

“Really our job is to reinforce the story that’s trying to be told,” Stephens said, adding that a big part of reinforcing the story is working closely with the client. “We never want to interfere with the story of the show.”

The 93rd Academy Awards airs on April 25, 2021 with a range of awards up for grabs — actor/actress in lead/supporting roles, animated feature films, cinematography, costume design, directing, and best picture to name a few. Some of those nominated this year are Anthony Hopkins, Gary Oldman, Steven Yeun, Sacha Baron Cohen, Viola Davis, Andra Day, Vanessa Kirby, and the late Chadwick Boseman. Here’s the full list of nominations.

Read more about the projects featured with the release of Vectorworks 2021: